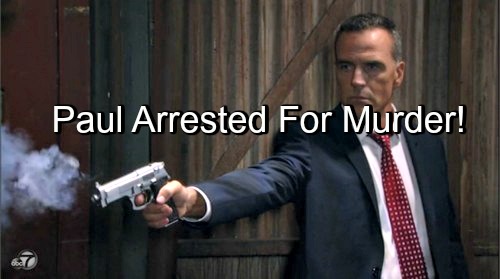 Many GH fans will be thrilled to see dirty DA Paul cooling his heels in the PCPD lockup and so will his enemies chief among them Sonny Corinthos (Maurice Benard). We’re also hoping that Ava Jerome (Maura West) shows up to smirk at him.

With Paul behind bars will that give Ava a chance to search his place for the incriminating flash drive? The one thing we’re wondering about is whether it will be Carlos that implicates Paul in the shooting of Kyle Sloane (Robb Derringer) or if it will be Anna that rats him out…

Paul was sending money to Carlos but now that Carlos has been arrested, would he stay loyal? We’ve got our money on Anna being the one to tell on Paul for several reasons. Check it out…

#1 Paul is arrested for Sloane’s shooting and not his other big crime – shooting Sonny! Carlos knows that Paul is the one who shot Sonny yet Carlos taunted Sonny and let him think he put him in the wheelchair. Anna does NOT know Paul shot Sonny, so Paul NOT being charged for Sonny’s shooting points to Anna.

#2 Carlos may still hope that Paul and Julian Jerome (William deVry) will get him out of this jam. Remember Carlos has gone to prison before rather than rat out the Jeromes and if he rats on Paul, he can’t get paid. Carlos is better served by taking a wait and see approach.

#3 Anna has nothing to lose since she will soon be arrested for shooting Carlos, even if Carlos doesn’t offer any evidence on that point. Paul ratted Anna out. No way will Anna pay for her crimes while allowing the dirty DA to evade justice.

#4 Another sign that points to Anna being the source of Paul’s downfall is that Julian won’t be arrested until the Nurse’s Ball according to GH spoilers. If Carlos was talking, Jordan would have what she needs to arrest Paul and Julian for their crimes. Paul alone being arrested points to Anna as the source.

#5 Anna has a lot more motivation to spill the beans on Paul than does Carlos. He knows the only reason Sonny didn’t kill him in Ecuador was so he could finger Julian for ordering Duke’s death. But if Carlos blabs on Julian, he knows he’ll be killed by Jerome enforcers in Pentonville. Carlos will keep quiet for now.

Carlos is a tough guy who’s not afraid of jail and no way would he be offered an immunity deal at this point – especially with Paul arrested. Plus, why would Carlos give Sonny and Anna any satisfaction by testifying against Julian? Anna shot Carlos and Sonny hates him, so he won’t help them out.

What do you think GH fans? Are you thrilled to see Paul paying for one of his crimes finally? Is there any way he can slither his way out of the murder charge for shooting Sloane? Share your comments below and come back to CDL often for more “General Hospital” spoilers and news.