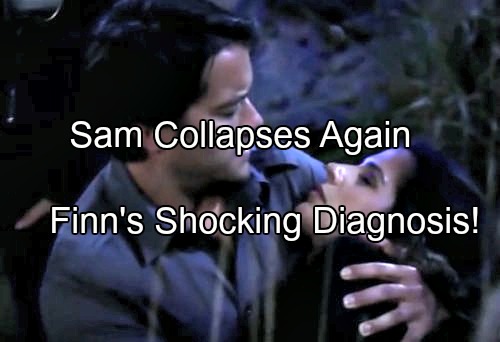 Recent General Hospital (GH) spoilers tease that whatever was plaguing Sam Morgan (Kelly Monaco) in Greece has followed her back home to Port Charles. Sam will soon collapse and requires medical attention and that leads to a stunning new storyline for JaSam.

Sam has two big conversations coming now that she’s back in Port Charles – one with each of her parents. Sam goes to see Alexis Davis (Nancy Grahn) and tells her about the trouble on Cassadine Island and them being held hostage by Valentin Cassadine (James Stuart).

Alexis is close to having a massive breakdown over her near-murder at the hands of Julian Jerome (William deVry) and now his arrest. The news about Sam being held captive by Alexis’ evil half-brother will NOT help Alexis’ state of mind and neither will Sam’s looming health crisis.

Also overdue is a confrontation between Sam and Julian. Sam has some strong words for her father on trying to kill her mom. Will it be this confrontation that causes Sam to collapse once again? Both times that she’s fainted, there have been stressful situations. 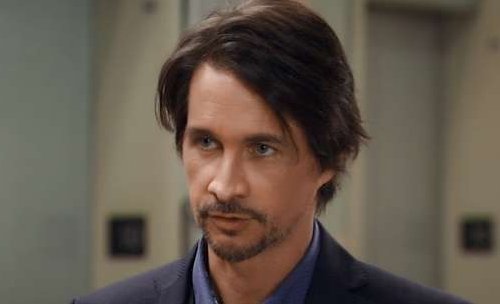 First was when Jason was tied up at the Cassadine Island mansion and they were being held at gunpoint. The second time was after Ava Jerome (Maura West) told Sam that Jason was dead in the plane crash and Sam went apoplectic at the idea and wanted to go hunt for her honey.

So will Sam go down for a third time during her unpleasant conversation with her dad? No matter when or where it happens, General Hospital spoilers reveal it will be very soon and Jason will NOT be around to help her out. Someone else will have to take care of Sam.

The bottom line is that Sam ends up at GH and Dr Hamilton Finn (Michael Easton) will be the attending physician who checks her out and offers a diagnosis. This is the first time Finn and Sam share screen time, but General Hospital spoilers indicate there will be no mention made of the new character.

Since Sam and Silas Clay (also Michael Easton) were hot and heavy, it seems worth a mention, but the GH writers decided to skip over the elephant in the room since it’s been brought up many times before. Seems odd, but that’s how it’s supposed to go.

Finn will examine Sam and then figures out what is wrong. The diagnosis will reverberate across Port Charles. If she’s preggers with a JaSam baby, there will be great excitement. But if Sam is sick, there will be fear among many.

Of interest is that it will be Liz Webber (Rebecca Herbst) that reveals to Jason that Sam is at GH and ailing and sends him to take care of his other baby mama. It could be that Liz will wind up helping Finn to care for her former rival Sam.

GH spoilers tease that it’s far more likely that Sam is ill than carrying Jason’s child – the big question is how sick Sam is and is it contagious? What do you think GH fans? Share your comments below on Sam’s latest collapse and what it means for her and Jason.

Plus, check back with CDL often for all the latest General Hospital spoilers and news.