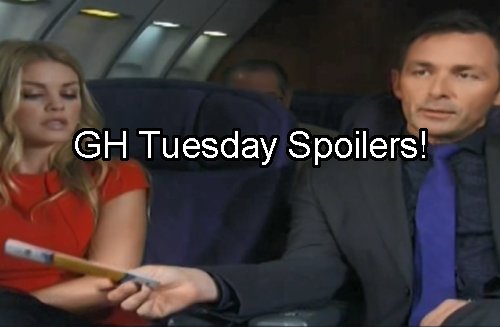 New General Hospital (GH) spoilers for the Tuesday, October 25 GH episode reveal that Valentin is back and he’s mad as hell, Franco chooses Liz over his mom, Hayden and Finn spice up their day, Nina mocks Julian, and Ava is terrified when Sonny goes off on Scotty.

Claudette Bolland (Bree Williamson) thought she made a clean getaway but Valentin Cassadine (James Stuart) is on the airplane and won’t let her go anywhere. He wants back what she stole and it’s easy to guess that Valentin means Charlotte Bolland (Scarlett Fernandez). 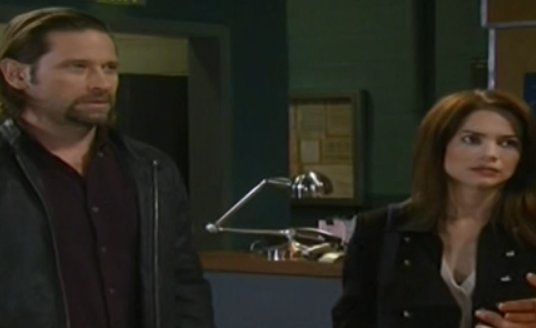 This is confirmation of what GH fans suspected that Griffin Munro (Matt Cohen) is not Charlotte’s father – perhaps it’s Valentin since he’s gone to the trouble to break out of jail to get her back. How much will Claudette reveal and is it Valentin that sends a suspicious video to Nathan West (Ryan Paevey)? 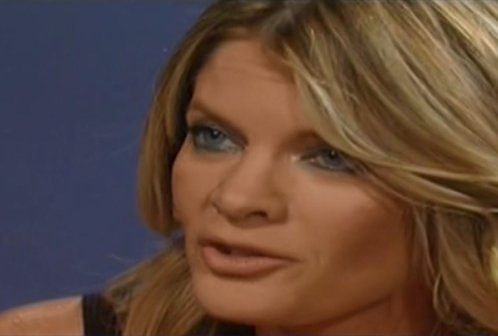 Franco has the recording he made of Heather Webber’s (Robin Mattson) murder confession and they want to turn it in as evidence so that GH can be reopened STAT! Jordan tries to get them to calm down and tell her what they have – will she close the case?

Liz also helps Griffin out when Charlotte has a meltdown and Franco struggles to keep his emotions in check. Hayden Barnes (Rebecca Budig) and Hamilton Finn (Michael Easton) might do the deed. Hayden wants to know if Finn cares about her and this conversation might interrupt the action. 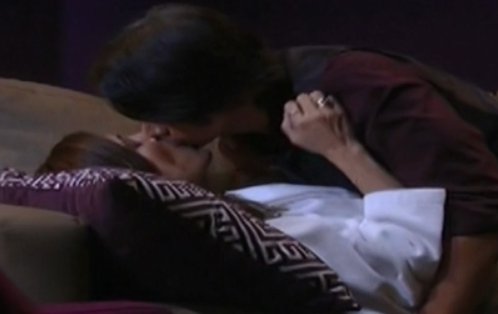 Nina Clay (Michelle Stafford) runs into Julian Jerome (William deVry) at the bar and tells him she’s surprised he’s still breathing after the attempt on his life. Julian and Nina will swap insults over liquor but she’s right, he is lucky but also thinks he can use his near-death to nail Sonny Corinthos (Maurice Benard).

Jason Morgan (Billy Miller) and Sam Morgan (Kelly Monaco) break the news to Danny that another little Morgan is on the way and he’s thrilled to be a big brother. But Jason has other worries on his mind beyond their happy family moment. 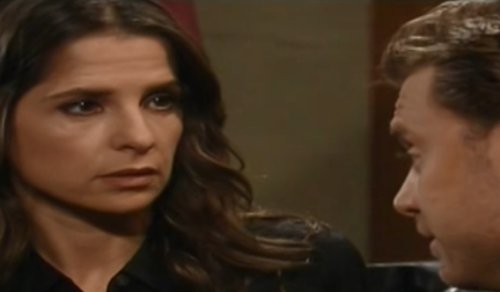 Jason tells Sam he doesn’t think anyone can stop Sonny and he’s not sure what the mob boss will try next since he’s out of his mind with grief over the death of Morgan Corinthos (Bryan Craig). Ava Jerome (Maura West) is also worried about what Sonny will do next.

Ava tells Scotty Baldwin (Kin Shriner) that she tossed the swapped pills but says Sonny will kill her if he ever finds out what she did to Morgan. Scotty goes toe to toe with Sonny later. Scott pushes Sonny’s buttons over Morgan and Sonny attacks him physically. 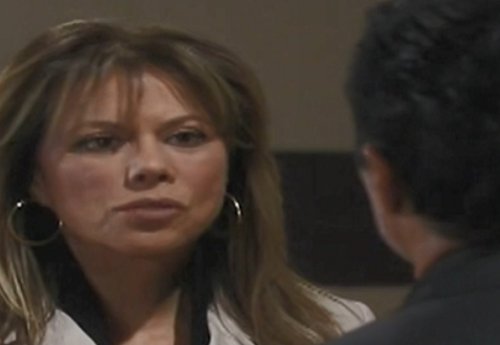 Alexis Davis (Nancy Grahn) also has an interaction with Sonny that goes South. Alexis tells Sonny she’s sorry about Morgan and then the talk turns to Julian. Unlike most other people in town, Alexis blames her hubby for Morgan’s death, not Sonny.

Sonny says Julian thinks that he’s going to kill him and Alexis asks “are you?” and she seems to like the idea. This whole exchange might be tainted by Alexis’ frequent boozing. Is she drunk when she encourages her baby daddy to kill her other baby daddy?

Don’t miss a moment on GH this week. Share your comments on the spoilers for GH on Tuesday, October 25 and be sure to check back with CDL often for the latest General Hospital spoilers and news.