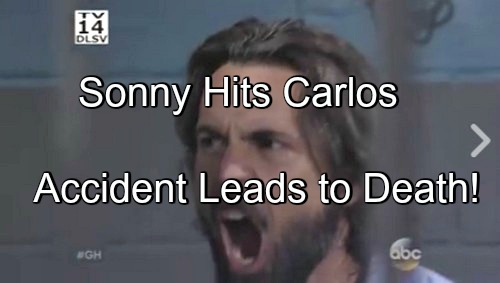 “General Hospital” (GH) spoilers video just released shows the catastrophic accident from next week’s episode on Monday, May 9 when a prison transfer goes awry with Carlos Rivera (Jeffrey V Parise) on board. Could Sonny Corinthos (Maurice Benard) be behind this accident that may harm Dante Falconeri (Dominic Zamprogna)?

The video shows Sonny threatening Carlos in his PCPD cell and telling him he’s a dead man. Now that the witness, Hale, was offed by Julian Jerome’s (William DeVry) head thug Hammer, Sonny and Anna Devane (Finola Hughes) know that the state’s case against Carlos is shaky and may be dismissed.

General Hospital spoilers say Sonny is not willing to let that happen. Anna asked Sonny to let the legal system make Carlos and Julian pay but now that it’s failing, GH spoilers reveal that Sonny will take matters into his own hands and Carly Corinthos (Laura Wright) will beg him not to do anything violent. Sonny won’t listen. 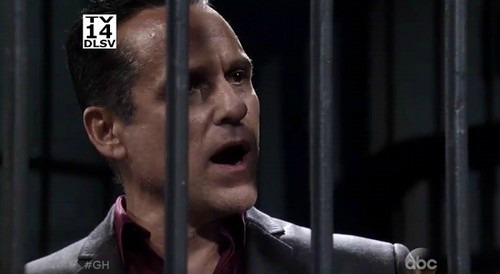 The problem is, Sonny’s plans never ever work out and this one will go awry too if it’s Sonny behind this horrible “accident.” The transport vehicle moving Carlos is struck by another vehicle. Presumably a Corinthos Family hitman emerges to take out Carlos from the disabled prison van. Was that how Sonny planned to kill Carlos without worrying about the poor cops traveling with him?

If Sonny knew Dante was escorting Carlos, he would not have gone this route. Or perhaps the plan was to strike the van and disable it then shoot Carlos and leave the others intact. Instead, what happens is much more tragic. GH spoilers reveal a life or death struggle as the fallout from this incident.

The cop driving the van is likely dead meat. Dante is up front and Nathan West (Ryan Paevey) is in the back behind Carlos. Will it be Dante that’s grievously injured? If so, that will be the second time Sonny is responsible for wounding Dante – if it’s Sonny that masterminded the crash.

It seems more likely that it will be Dante wounded since Nathan just had his own life and death drama. Plus, this week Dante and Lulu Spencer (Emme Rylan) will decide to move forward with baby plans so it would be doubly tragic for Dante to be in danger given their new family plans. 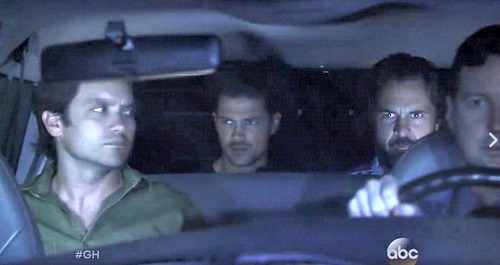 This accident will not work out the way Sonny wants for a couple of reasons (if it’s his plan). First, it’s likely Dante will be wounded. Second, Carlos will take this as an opportunity to escape. GH spoilers teased that Carlos would soon be on the run from the PCPD.

Carlos could not have set this wreck up as an escape attempt since he’s got no resources – and Julian has no reason to break him out since he just killed the witness and things are looking up for Carlos and Julian both. The only person with a motive to try and kill Carlos is Sonny.

And Sonny just told Carlos he was going to kill him. There’s always the chance that this accident could just be an “accident” but that’s unlikely hot on the heels of Sonny making death threats. Carlos is genuinely terrified and when the crash happens, will know he needs to get out of there or he’ll die.

But when people start to figure out that Sonny might be responsible for this horrific crash, he’ll be in trouble with those he loves. Lulu will hate that Dante’s life is at risk and Carly may be ready to walk away from Sonny. Olivia Falconeri (Lisa LoCicero) will be furious and everyone may turn on him.

There’s always the chance that Sonny was not involved – but all signs point to this being another of his schemes that goes tragically wrong and hurts people that he loves as collateral damage. What do you think GH fans? Is Sonny to blame for the prison transfer crash?

If Sonny did this, is he just as bad as Julian? Share your comments below on this impending tragedy and check back with CDL for more “General Hospital” spoilers and news.