‘General Hospital’ Spoilers: Valentin Lied About Who He Really Is – True Identity Revealed 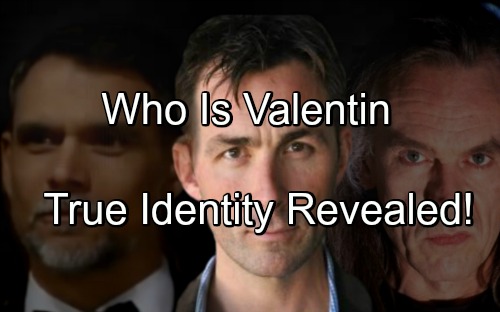 New General Hospital (GH) spoilers tease that Valentin Cassadine (James Stuart) is not who he claims to be. We know a few things for sure – he is the biological father of Charlotte Cassadine (Scarlett Fernandez), speaks Greek, French and English, is dangerous, and has power and influence.

Other than these few facts, GH fans don’t know for sure who he is. The only family link that Valentin has proven conclusively is that he and Charlotte are father and daughter. But they could be anyone. He really could be Theo Hart, the humble fisherman, who rose up to take revenge on the Cassadines.

But what’s more interesting is if he’s Stavros Cassadine in disguise. At one point, there was a real Valentin Cassadine – Helena Cassadine (Constance Towers) mentioned him to Luke Spencer (Anthony Geary) but that doesn’t mean that’s who the guy is that’s in Port Charles right now.

Remember that pile of bones down in the Cassadine catacombs on the island in Greece? Could that have been Valentin’s body? The jewelry that looked like it belonged to Luke Spencer could have been a red herring to distract fans away from wondering who it was.

Lulu Spencer (Emme Rylan) thought it was Luke but then Robert Scorpio (Tristan Rogers) cleared that up by contacting Luke and speaking to him to prove he’s alive. But that body wasn’t show by accident – it was a plot point that meant something. Is Valentin dead?

Is the guy calling himself Valentin really Stavros who has been revived yet again? A little plastic surgery and Stavros could look like someone else since looking like himself would cause problems since he’s a known criminal and is hated by many in Port Charles.

Valentin just came on the scene five years ago. Perhaps he’s been held captive before then. Maybe that was him on the loose for a while but then Stavros killed him and took over his life after Dante Falconeri (Dominic Zamprogna) supposedly killed him in 2014.

Alternately, Valentin could be someone like Cesar Faison (Anders Hove) in disguise and that’s why he has such a creepy obsession with Anna Devane (Finola Hughes). Valentin whispered to Anna in Latin “open your eyes.”

It’s been haunting Anna for some time that she felt like she recognized Valentin but couldn’t place where she’d seen him before. If Valentin is someone else in disguise, the one part of him that would be the same is his eyes and Valentin just told her to open hers. Was that a hint?

Anna never overlapped with Stavros Cassadine so she wouldn’t have lingering memories of him. Of course, Cesar is older than Valentin and a bit shorter, but GH doesn’t get hung up on technicalities like that. Both Anna and Dr Obrecht (Kathleen Gati) have disguised themselves as the other.

They are not the same height, same build, and don’t have the same eye color, but GH did it anyway. Could they be doing it again with Valentin and Cesar? Or with Valentin and Stavros? What do you think GH fans? Who is Valentin, other than Charlotte’s father?

#GH Thanksgiving is about to take a twisted turn. pic.twitter.com/MqU8uX9a5X