General Hospital (GH) Spoilers: Will Alexis and Sonny Hook Up – Vote in Our Poll 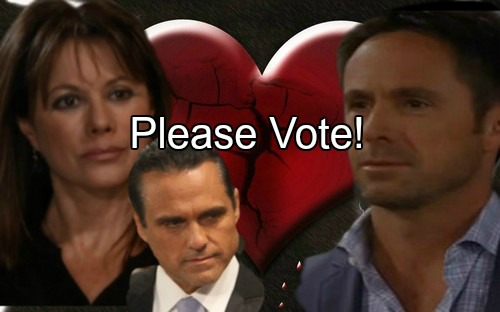 “General Hospital” (GH) spoilers tease that there may be renewed heat coming soon between Alexis Davis (Nancy L Grahn) and Sonny Corinthos (Maurice Benard). Are GH showrunners plotting a revival of Alexis and Sonny’s short-lived relationship? Vote in the POLL below after you read the evidence.

Carly Corinthos (Laura Wright) set the stage for an Alexis and Sonny revival by reminding GH fans that Alexis has always had a thing for Sonny. Carly told Sonny that the only reason Alexis is with Julian Jerome (William deVry) is because she can’t have him, her original mob crush.

But now that Alexis knows about Julian’s involvement in Carlos Rivera’s (Jeffrey V Parise) murder and likely also in the witness Hale’s death, her new marriage is crumbling around her. Things will pick up speed now that Sonny threw that insane tantrum at her house.

Not only did Alexis already have the pressure of Julian’s wrongdoing but now Sonny told her she’s out of his life. Did Sonny engage in some theatrics to push Alexis over the edge? Was Sonny playing on that residual affection Carly told him is there to get Alexis away from Julian?

General Hospital spoilers say that Julian and Alexis’ marriage seems to be done and over and we’re just waiting for them to flat line. Julian has manipulated her and stomped on their love, so they’re just about done. And after Julian is arrested at the Nurse’s Ball, Alexis may be so wounded, she goes to Sonny for comfort.

Sonny’s marriage might be heading for the rocks too. Carly is working closely with Dr Hamilton Finn (Michael Easton) to sort out the Josslyn Jacks (Eden McCoy) kidney mystery. Once Sonny spots them with their heads together, he will flip out.

Carly doesn’t like it when Sonny gets crazed with jealousy – particularly since this is Carly trying to take care of her daughter. To top that off, Sonny and Julian are headed for a final confrontation over Duke’s death. Sonny coming into Julian’s house and striking him was the straw.

GH spoilers say Carly will not be happy when she hears what Sonny did to Julian and unhappier still when it continues to escalate. Carly begs him to stop and GH spoilers hint that more violence leads to the death of Lucas Jones (Ryan Carnes) as May sweeps hits fever pitch around the time of the Nurse’s Ball on next week’s episodes.

Will Lucas be caught in the cross fire of a showdown between Sonny and Julian? If Sonny’s actions result in the death of Carly’s brother, that would be a deal breaker. Carly has made it clear to Sonny that she’s done with the violence and this might finish them.

With Carly angry at Sonny and Finn comforting her – and Alexis all alone – that sets the stage for Alexis and Sonny to console each other despite him telling her they are done. Whether Sonny and Alexis fall into bed just one time, like they did back in the day, or embark on a relationship isn’t clear yet.

What is clear is that GH showrunners seem to be setting the stage to rip apart both Port Charles mob marriages and mix things up. GH spoilers show Julian migrating to Nina Clay (Michelle Stafford), Carly to Finn, and Sonny to Alexis.

It’s like relationship musical chairs starting soon. What do you think? Will you be upset if Alexis and Sonny end up in each other’s arms? Vote in the POLL then share your comments below on the marriage

Be sure to check back with CDL every day for “General Hospital” spoilers, news and more.