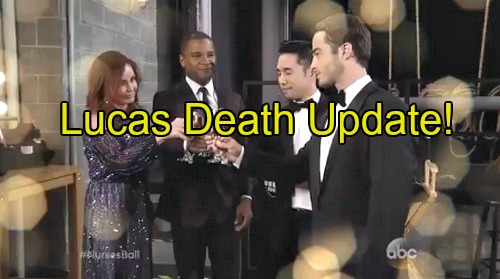 “General Hospital” (GH) spoilers tease that the Nurse’s Ball this year will play host to the wedding of Lucas Jones (Ryan Carnes) and Brad Cooper (Parry Shen) but this event can never seem to go off without some drama and this year is no exception.

Lucy Coe (Lynn Herring), the official emcee and coordinator of the annual event, will be tapped to officiate and marry Lucas to Brad, however General Hospital spoilers tell us that things don’t go off quite as planned. We know that Dr Liesl Obrecht (Kathleen Gati) plans to steal the show.

Plus, there will be a custody showdown over baby Avery between Ava Jerome (Maura West) and Sonny Corinthos (Maurice Benard) with Carly Corinthos (Laura Wright) pushing hard to keep Ava’s kid. Then there’s a public humiliation planned for Liz Webber (Rebecca Herbst).

But all that is just the precursor to the real drama of the night – when the engaged couple may face life and death drama – that could end their wedding and their relationship. As Lucas and Brad prepare to get hitched, GH spoilers tease that there’s an emergency back at General Hospital.

Lucas has to leave and rush to GH to help out, but will he make it there in time? Will he make it there at all? As Lucas heads out of the ball to play doctor, he gets caught up in something bad (and likely dangerous) that’s going down and seems to be a victim of circumstance.

Other spoilers tease that Morgan Corinthos (Bryan Craig) sees a bad thing happen and may witness what happens to his uncle – and it could be life-or-death serious. We know Morgan gets his “get out of the asylum free” card on this week’s epsiodes and he’ll be on hand at the ball.

Will Morgan be hanging out on the MetroCourt restaurant balcony and see what happens to Lucas? We know that a body is found, Morgan is heartbroken, and Jordan Ashford (Vinessa Antoine) makes an arrest – likely Julian Jerome (William deVry).

Other clues that lead to the assumption that Lucas may meet his end before he can get hitched are that Carly and Bobbie Spencer (Jacklyn Zeman) are devastated, as is Julian, and then Brad gets bad news by the last day of the month as May sweeps winds down.

Will Lucas and Brad make it to “I do” before it turns into “he died”? Lucas portrayer Ryan Carnes hasn’t dispelled the talk that Lucas dies and will meet a grim end and when asked on Twitter about events to come, he said, “some things change, that’s all I can say…”

We’ll know in a week what goes down with the Brad-Lucas wedding for sure, but losing Lucas could be Julian’s ultimate karmic retribution for the lives he’s taken and lies he’s told. What do you think GH fans? Will tragedy strike Brad and Lucas’ nuptials? Will they make it to the altar?

Share your comments below and come back to CDL for daily “General Hospital” spoilers and news.