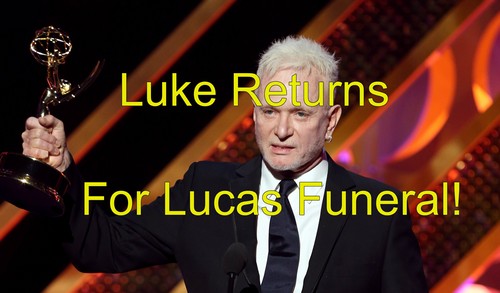 “General Hospital” (GH) spoilers tease impending doom for Lucas Jones (Ryan Carnes) and his death will rip apart the Jerome and Corinthos families, but could also mean a reunion for the Spencers. Here’s what GH spoilers tease will happen.

Lucas is in the wrong place and becomes a victim of violence near the time of his scheduled wedding to Brad Cooper (Parry Shen). It looks like Lucas may linger, perhaps in a coma, but is mortally wounded and there’s no way to save him.

Other General Hospital spoilers tease that Bobbie Spencer (Jacklyn Zeman) has to make the hard choice to unplug Lucas and take him off life support. Other spoilers hint that Luke Spencer (Anthony Geary) may return to support his sister in this tough time.

When Geary left GH, he said – after Ron Carlivati was ousted – that he would be willing to come back but only for a meaningful storyline. Luke’s namesake nephew Lucas dying seems pretty meaningful. Plus, it would be strange, in terms of story, if Luke did NOT return for the funeral.

The return of Luke Spencer is hinted for early June just after Bobbie has to make the terrible decision to let Lucas die. But this begs the question, how long will Luke stay and will he get up to anything else while in town? And will Lucky Spencer (Jonathan Jackson) also put in an appearance?

It seems that Lucas’ death is tied to mob violence and Luke is a former mobster himself. Will he confront his old pal Sonny Corinthos (Maurice Benard) as well as Julian Jerome (William deVry) about the collateral damage that’s wreaking havoc in Port Chuck?

Will Luke finally give Laura Spencer (Genie Francis) a proper farewell when he leaves this time? Luke scurried out of town without giving a proper goodbye to those who love him last time. Let’s hope this time there’s no strolling slowly off the pier in the fog of night.

Could Luke’s return tie into the investigation of the artifacts that Helena Cassadine (Constance Towers) left for Laura, Lulu Spencer (Emme Rylan), Alexis Davis (Nancy L Grahn), and others? Also, is there a chance that Luke could give Liz Webber (Rebecca Herbst) some insight on her son?

Might Luke know what Helena did to Jake Spencer (Hudson West) on Cassadine Island? Fingers crossed that if GH showrunners go to all the trouble to bring Luke back that he’ll get a meaty story rather than just a funeral cameo to comfort his loved ones. We’ll see.

What do you think GH fans? Are you excited to see Luke back despite the sad circumstances? Share your comments below and come back to CDL often for more “General Hospital” spoilers and news.