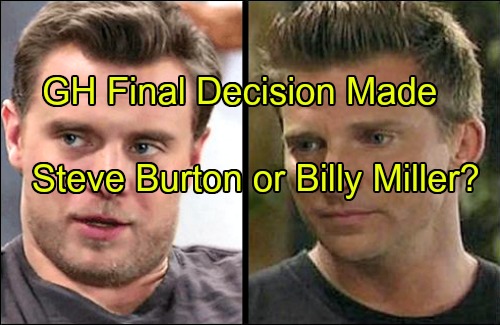 Simmering General Hospital (GH) spoilers reveal that Steve Burton could return as Stone Cold Jason Morgan if not for Billy Miller’s recent contract renewal. For GH fans that prefer Burton, this is a major disappointment, but it’s all about the money, not what the fans prefer.

Billy Miller’s contract renews in October each year and General Hospital spoilers indicate he’s on a year-to-year basis since the actor prefers to keep himself open for outside projects. Remember last year, there was talk that he would not renew because of his Urban Cowboy pilot.

That series was not picked up, but Miller seems to like to keep his options open. When Steve Burton’s exit from The Young and The Restless was revealed, it became apparent that this was a matter of poor timing.

GH can’t afford to have both Steve Burton and Billy Miller on cast at the same time – even though there could be an excellent storyline of dueling Jasons. Billy’s Jake Doe could turn out to be a fake planted by Helena while Steve could return as the “real” Jason.

That would be good stuff but the show can’t afford the salary of both actors at once. They just cut Tyler Christopher over money and both Rebecca Herbst and Roger Howarth were put through reportedly harsh contract negotiations very recently.

If word of Burton’s departure from Y&R had reach GH showrunners in time, they might not have renewed Miller’s contract. There’s always the chance that General Hospital could try next year when Miller’s gig is up for renewal to make the swap but that requires luck in timing. 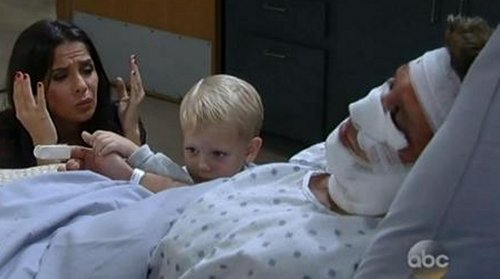 Steve Burton is busy with his new Nashville restaurant Jack & Jamesons that he co-owns with fellow GH-alum Jonathan Jackson (ex-Lucky) and he does a lot of voice work for video games, specifically the Final Fantasy franchise which he’s been voicing for more than a decade.

General Hospital showrunners might have missed their window to lure Steve Burton back by rushing their renewal of Billy Miller’s contract. Fans raged when Liz Webber went missing from the show because of protracted contract talks with Rebecca Herbst.

Similarly, fans were outraged over the talk that Roger Howarth might leave and downright shocked when Tyler Christopher’s character Nikolas Cassadine was killed off when renewal talks failed. Christopher told fans at recent GH events that it was strictly a money issue on GH’s part.

GH fans are deeply divided on which Jason Morgan they prefer – Steve Burton, the originator of the role – or Billy Miller, who has played Jason Morgan well, but is not the “Stone Cold” that fans adore. Miller’s Jason is essentially an entirely new character, not the revival of Jason of years past.

What do you think GH fans? Are you upset that contract timing has blocked Steve Burton from returning to the role of Jason? Do you prefer Billy Miller’s Jason to the Burton version of Jason from the past? Are you hoping contracts align in the future for an actor swap or should GH leave it alone?

Poll results show that Billy Miller has a solid lead over Steve Burton in fans’s preference for playing Jason Morgan – but fans do agree that they’d like to see more ‘Stone Cold’ in Miller’s portrayal of the character. Share your comments below and check back with CDL often for the latest General Hospital spoilers and news.