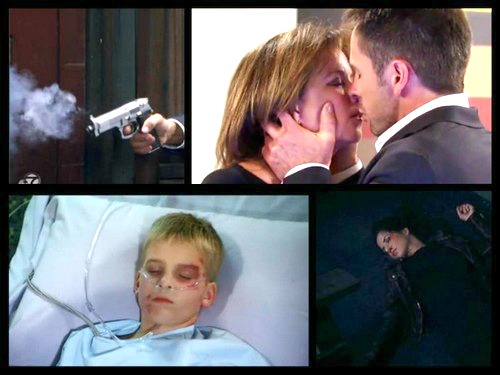 “General Hospital” (GH) spoilers for February sweeps indicate Port Charles has some very happy and very sad days ahead as a super couple weds, violence breaks out, and secrets are exposed. Jake and Sam both struggle with medical issues and more. Check out these shocking sweeps spoilers.

Julian Jerome (William deVry) and Alexis Davis (Nancy Lee Grahn) enjoy a three episode arc of wedding festivities and looks like the guest list includes all of Port Chuck. Sonny Corinthos (Maurice Benard) is there despite his hatred of Julian.

Nina Clay (Michelle Stafford) and Franco (Roger Howarth) are on hand and there will be a surprise wedding guest that may cause drama immediately following their I do’s. Some spoilers tease it could be Anna Devane (Finola Hughes) coming to arrest Julian.

Even though Anna came back to town, she left Robert Scorpio (Tristan Rogers) in pursuit of Carlos Rivera (Jeffrey Vincent Parise). If Robert nabs Carlos, he could get the confession needed to take down Julian for ordering the killing of Duke Lavery (Ian Buchanan). That would be a terrible start to the marriage…

Paul Hornsby (Richard Burgi) is worried about Anna and tries to dig info out of Jordan Ashford (Vinessa Antoine), but all that does is put up Jordan’s red flags. She warns Anna that Paul is on to her and so Anna takes Robert’s advice and turns on the charm with Paul.

She gets him to admit a major secret – he has a daughter who may be in town. Anna then puts Mac Scorpio (John J York) to work to find out who the mystery lady is and what she’s up to. Paul may set up Ava Jerome (Maura West) to take the fall with Raj.

That will go bad because Sonny is also after Ava and it looks like a mob shooting at the pier brings lots of trouble. Lulu Spencer (Emme Rylan) may be shot – some spoilers hint that it may be a manic Morgan Corinthos (Bryan Craig) who accidentally puts a bullet into her.

The gun battle has Carly Corinthos (Laura Wright) rethinking how much of a danger Sonny represents to those she loves. And Sonny and Carly have to make some hard choices about Morgan’s mental health because he’s off his meds again.

Nathan West (Ryan Paevey) and Maxie Jones (Kirsten Storms) move in together but now they need Lulu gone out of the apartment and her kid too. Nathan and Maxie try to reunite Lulu and Dante Falconeri (Dominic Zamprogna) so they can get some elbow room.

Diane Miller (Carolyn Hennesy) is back to represent someone – is this Morgan over the accidental shooting? We’ll also see Jason Morgan (Billy Miller) and Sam Morgan (Kelly Monaco) grow closer as he stays at her side while she recuperates from the explosion of Liz’s house.

Meanwhile, Liz may be headed for a breakdown. She finally admits some hard truths to herself and will soon come clean to Jake about why she and Jason split. Liz is spiraling emotionally about her bad choices and Franco turns out to be a surprising rock and real friend to her.

What do you think GH fans? Are you excited to see all this action unfold in coming weeks for February sweeps? Share your comments below and come back to CDL often for more “General Hospital” spoilers and news.