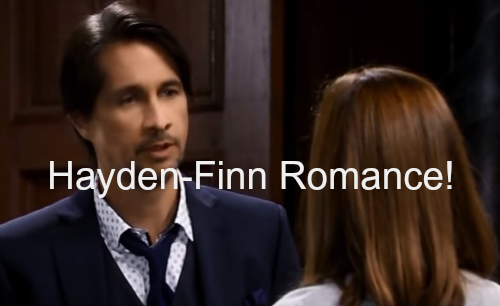 General Hospital (GH) spoilers reveal that an unlikely romance will spark between Hamilton Finn (Michael Easton) and Hayden Barnes (Rebecca Budig). The presumed widow and lizard-loving doc will heat up soon and here’s the inside scoop.

Remember Finn started feeling off when he was at The Floating Rib hanging out with Hayden and he asked her to help him get back to the MetroCourt. It was Hayden’s appreciation of Roxie that caused them to hit it off and him to trust her to help.

Hayden got Finn back to the hotel but she didn’t just drop him off and leave. In fact, Hayden was so concerned that she stayed to take care of him and Roxie. So when Finn wakes up in his hotel room, he’s stunned to find Hayden there with him.

Looks like Hayden stayed the night to keep an eye on the doctor but when he wakes and sees her, he’s self-conscious and wants her gone. Hayden won’t be shoved off like that – she’s genuinely concerned about Finn and wants to help.

Hayden has made a good impression on Finn in many ways. First, she handed him a check to try and help make up for what her father did to wreck his research. Second, when he had one of his spells at Wyndemere, she helped him shoot up.

Third, she had genuine interest in and affection for Roxie – which no other woman in Port Charles has done. Fourth, they had fun at The Floating Rib and then she helped him again. Hayden has consistently been there for Finn.

That could be what moves Finn to offer truth or it could be that he just needs to unburden himself to someone. No matter what possess him to do so, Finn opens up to Hayden about his health concerns. Now she knows why he’s been using “drugs.”

That drugs are for his medical problems – they aren’t recreational. Once Hayden finds out what’s up with Finn, she’ll be even more convicted about helping him. Of course, all this unfolds while Hayden is still wrapping her head around being a widow.

Hayden doesn’t seem to be playing the grieving widow but, then again, Nikolas Cassadine (Tyler Christopher – now Nick Stabile) made it clear he’s done with her and can’t stand the sight of her. Plus, there’s no body to bury, so maybe she’s in denial.

Looks like Hayden and Tracy may team up to defend Finn since both are attached to him and Monica may be overrun by them. Finn will continue to be amazed by Hayden as she steps up for him in every possible way.

Of course, Finn is still grieving his dead wife, Hayden has more Cassadine drama coming, and there’s still the issue of Hayden’s baggage as Rachel Berlin, daughter of the Ponzi scheme king who may have contributed to the death of Finn’s wife.

General Hospital spoilers reveal that Finn will try and fight his growing affection for Hayden because of all these complications but soon it will be undeniable. What do you think GH fans? Are you shipping “Fayden”?

Share your comments below on this unexpected romance that will kick off soon and check back with CDL often for more General Hospital spoilers and news.