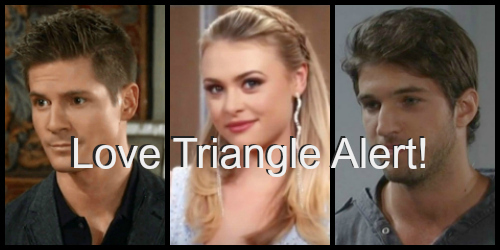 Morgan has been nervous about leaving the Freedman Clinic and making his re-entry back into the “real” world. He also hates the idea that Kiki is moving on with Dillon. Plus, Sonny Corinthos (Maurice Benard) is on Team Kiki-Morgan.

Dr Andre Maddox (Anthony Montgomery) has signed off on Morgan’s release so he’ll be leaving the mental institution this week. Of course, Morgan will make a bee line for his ex-girlfriend and arrives at the most inopportune moment.

Related: Is Rosalie Coming Back to Port Charles?

General Hospital spoilers reveal that Dillon goes to pick Kiki up for their first date. Things are looking good after the Nurses Ball performance, that great kiss backstage – plus more hot smooching at the Crimson offices.

Dillon is ready for more of that and so is Kiki. But when Morgan gate crashes their first date, things turn South quickly. Morgan isn’t happy to see them together and will pull Kiki away from Dillon because he says they need to talk.

But when Morgan takes Kiki aside, Dillon will be jealous to see them looking cozy and irritated that Morgan showed up to interrupt their first official date. But what is it that Morgan has to tell Kiki? Will he spill about her mom’s intervention?

If Morgan is desperate to get with Kiki, he might tell her that the only reason he called it quits with her is because Ava Jerome (Maura West) leveraged him to tay away. Perhaps Morgan thinks that will be enough to win her back, but is it?

The bottom line is that Kiki’s past entanglement threatens the new and healthy relationship she could build with Dillon who has already, laughingly, promised not to sleep with anyone in her family. But clearly Morgan is not ready to let Kiki go.

General Hospital spoilers tease this tangled love story will turn into a full-blown love triangle and Morgan and Dillon will come close to getting violent forcing Kiki to step in and calm things down. Then it gets worse when an old foe returns.

Darby Collette (Jesica Ahlberg) will be back soon and she and Morgan will heat up. But Darby is not a healthy option for Morgan since she brings out the worst of his nature and only seemed to like him at the height of his bipolar crisis.

Dillon thinks that Kiki owes Morgan nothing after the way he’s treated her, particularly in regard to Ava, but Kiki will continue to be torn. Will she lose Dillon, who seems to be a great guy, because she can’t kick Morgan to the curb?

What do you think GH fans? Do you want Morgan to fight for Kiki or leave her alone? Do you think Morgan is wrong to try and sabotage Kiki and Dillon’s first date? Share your comments below on the upcoming Dillon-Kiki-Morgan drama.

Plus, be sure to come back to CDL often for more General Hospital spoilers and news.