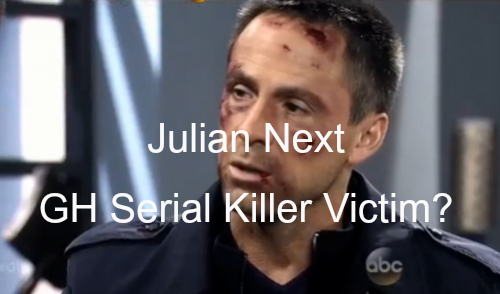 General Hospital (GH) spoilers tease that Julian Jerome (William deVry) will soon fall prey to an act of violence and land in a hospital bed. Will this make Julian so vulnerable that the GH serial killer comes after the Jerome mobster?

A GH script that leaked has prompted a number of General Hospital spoilers that not only does Julian wind up in the hospital but that he might be in even more danger than the event that injured him badly enough to land him in GH.

The leaked GH script was for an episode shot on June 16 and set to air Monday, July 18. The characters listed are Julian, Lucas Jones (Ryan Carnes) and Olivia Falconeri (Lisa LoCicero) plus nurses. This ties into a lot of other spoilers that have been released.

Sonny Corinthos (Maurice Benard) will pressure the PCPD to produce results and arrest Julian for the Carlos Rivera (Jeffrey Parise) killing and Duke Lavery’s (Ian Buchanan) shooting. But when they don’t nail him, Sonny might take out a hit on his rival mobster.

Also, Ghost Carlos is telling Julian to kill Alexis Davis (Nancy Grahn), so they might get into a scuffle and she might injure Julian defending herself – or on accident. But no matter why or how Julian ends up at GH, there’s danger there. 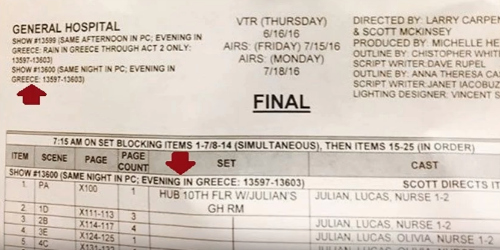 Dr Obrecht (Kathleen Gati) continues to suspect Hamilton Finn (Michael Easton) but all he’s guilty of is being terminally ill and a bit weird. It’s Dr Mayes (Matt Riedy) that Dr O should have her eye on. Liz Webber (Rebecca Herbst) will wonder about Dr Grumpy soon.

Liz sees and overhears Dr Mayes doing something that has her wondering if he’s not only a bad doctor, but perhaps a killer as well. So we’re wondering if the GH serial killer – whoever he or she may be – will set their sights on Julian.

The GH serial killer might come for Julian, but it’s doubtful they will succeed in killing the mob man. First, there’s no sign that William deVry is exiting the show. Second, Julian is a bad ass and can take down a doctor (assuming it is a doctor).

Third, Julian has future storylines brewing so killing him doesn’t make sense. Then again, GH will occasionally kill off someone in a shocking manner – like how they killed off Jake Webber (or so we thought) several years ago.

We’ll see what happens but it could be that the GH serial killer considers taking out Julian – or even tries to do so but is thwarted. General Hospital spoilers have confirmed another kill is coming, but the big question is who will it be?

What do you think GH fans? Will the GH killer take out a named character in July or will it be an extra no one cares about? Share your comments below and check back with CDL often for more General Hospital spoilers and news.