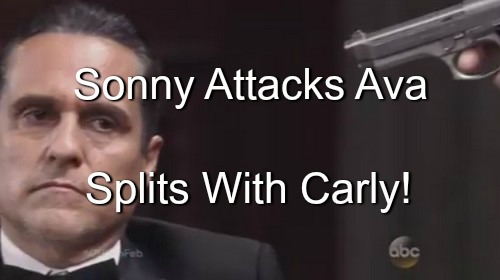 “General Hospital” (GH) spoilers tease that Morgan Corinthos (Bryan Craig) will be revealed as the true biological father of Avery and cause major ripple effects in the Corinthos and Jerome families. Will Sonny Corinthos (Maurice Benard) go into a bipolar rage when the truth comes out?

Sonny is very invested in the idea that he’s Avery’s father. In fact, winning her from Ava Jerome (Maura West) has become his primary mission in life that’s impacting his family and how he runs his criminal cartel. But what happens if he finds out he’s not Avery’s father but her grandfather?

And if Carly Corinthos (Laura Wright) was involved in keeping the paternity secret from Sonny, how much of a mess will that be? GH spoilers indicate that after the upcoming mob shootout which involves Morgan, Carly will seriously re-evaluate the whole mob lifestyle thing.

This is yet another time that the mob has put one of her kids into a bad situation – this time Morgan will shoot someone – likely Kiki Jerome (Hayley Erin) – and this is just another mob mess that Sonny has dragged them all into.

With their marriage already being shaky from that event, a paternity reveal of Morgan being Avery’s dad could rip the family apart. You’ll recall that Carly kept a paternity secret from Sonny years ago with Alexis Davis (Nancy Lee Grahn) about Kristina Corinthos (Lexi Ainsworth).

Sonny told Carly back then that it destroyed their trust once and for all and they split. Of course, they’ve had a long road since then and trust has been re-established, but the revelation that Carly kept a very similar secret once again could break Sonny and Carly up for good.

And if Sonny loses Carly and Avery, what’s to stop him from going off his meds and off the rails again? Just as Morgan starts to get his bipolar under control, could Sonny spiral out? And if Sonny does spin out, will Ava be in danger?

Maurice Benard teased on social media, “In one show, I can’t tell you which one, I do something I’ve never done in 23 years on GH and I’m not proud of it.” Is this foreshadowing that Sonny will give into his rage and physically assault Ava? Sonny has gotten rough with Ava before, but that would be a new low.

And Sonny harming a woman, even if it’s the murderous Ava, could estrange him from his family. Will we soon see the happy life that Sonny has built for himself torn apart because of an Avery custody reveal? Could he lose Avery, Carly, and everyone else if he turns uber-dark?

What do you think GH fans? If Sonny discovers that Morgan is really Avery’s father, will he snap? Are dark days ahead for the formerly mellow mobster? Share your comments below and check back with CDL often for more “General Hospital” spoilers and news.