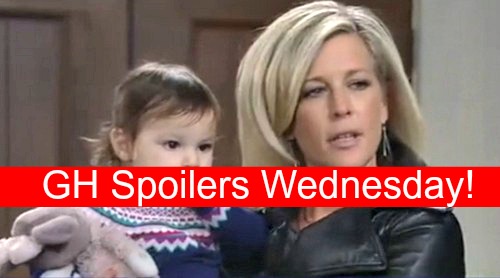 “General Hospital” (GH) spoilers for Wednesday February 3 tease a quickie Vegas wedding, the bitter custody battle between Ava and Sonny heats up, and surprises from Helena from beyond the grave. Check out these spoilers for tomorrow’s episode.

Hayden Barnes (Rebecca Budig) is wasting no time in her efforts to become the next Mrs. Cassadine and has talked Nikolas Cassadine (Tyler Christopher) into a Vegas quickie wedding (As CDL exclusively revealed weeks ago). They are in Sin City and she’s trying to drag him to the altar but he thinks something is up.

Nikolas begins to question whether he can trust Hayden and quizzes her again about her past. Looks like Nikolas may do an Internet search on her. What will he found out? Hayden may pass muster on the Internet test but then their ceremony is interrupted.

Laura Spencer (Genie Francis) calls Nikolas while a pleased Tracy Quartermaine (Jane Elliot) eavesdrops nearby. Laura demands to know if he’s eloping and tells him to stop. Will Nik take his mom’s call or let it go to voicemail?

Can Hayden assuage Nikolas’ suspicions long enough to say their vows and get a ring on her finger? Looks like it could happen. Tracy will be thrilled if Hayden can seal the deal, but she has no idea that Hayden has second thoughts and may be preparing to double-cross Tracy.

Meanwhile, the bitter custody battle between Ava Jerome (Maura West) and Sonny Corinthos (Maurice Benard) is about to get even nastier. Kiki Jerome (Hayley Erin) deliberately ignored her mother’s demand that she not allow Avery to see Sonny while she was babysitting.

Even worse, Kiki left Avery alone with Sonny and went out on a date with Morgan Corinthos (Bryan Craig). And, of course, Kiki and Morgan chose the MetroCourt, the one joint in town where Ava is a regular. Kiki thought her mom had the flu, but The Rib would still have been a safer choice.

When Ava runs into Kiki and Morgan, she immediately notices her baby is nowhere in sight and demands to know where Avery is. Kiki tries to distract her mom with an argument, but the question must be answered and Ava will find out Sonny has the kid.

Carly Corinthos (Laura Wright) is happy to see Avery, but worried that Sonny is having a visit without Ava’s permission. Ava was very clear with Carly when she asked for more time that hell would freeze over before it happened and now this.

Carly knows this is not good, but Sonny assures her it will be fine. It’s not. Ava consults with a lawyer – will it be Diane Miller (Carolyn Hennesy)? She’s leaked that she’s due back in Port Charles soon. Or will Scotty Baldwin (Kin Shriner) be the one to take the case?

But first, Scotty is with Franco (Roger Howarth) when Nina Clay (Michelle Stafford) comes in looking for some afternoon delight – she’s surprised to see her honey’s dad there when she was talking sex. Whoops… Nina is red-faced, but Scotty will take off to do business.

Scotty has news for Laura that will surprise her – on top of her surprise that her son ran off to marry an obvious con-woman… Scotty says Laura needs to come to the reading of Helena Cassadine’s (Constance Towers) will. What is that about?

GH spoilers have hinted for weeks that Laura has a big adventure coming and that it would involve Scotty. Is what happens at the will reading the catalyst for Laura’s adventure? Will Helena send her off on a wild goose chase?

After Scotty leaves Franco and Nina alone, they have a serious convo about their future. Nina was just talking babies the other day and Franco looked worried. GH history would indicate that Nina can’t have a bio-baby, but you never know.

But even if her ovaries are jacked because of her coma, they could always adopt. Surely no agency would mind that she’s shacking up with a reformed serial killer… The good news is, she’s rich, so they could probably buy a baby if they can’t produce one of their own.

What do you think GH fans? Will Nikolas and Hayden say “I do” and be husband and wife by the end of the week? Share your comments below and check back with CDL every day for more “General Hospital” spoilers and news.