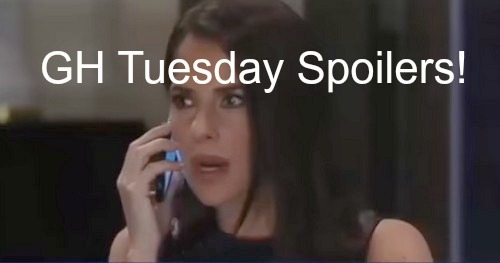 “General Hospital” (GH) spoilers reveal that Tuesday’s episode, March 8 will be a rough day for Hayden, Sam gets a lead, Anna and Paul are finally on the same side, Jordan and Andre may be on the rocks, and Dante and Lulu are patching things up. Here’s what goes down.

First, Hayden Barnes (Rebecca Budig) will be in a panic over seeing Sam Morgan (Kelly Monaco) having drinks with a blast from her past Baxter Corbin (Tom Parker). Hayden knows that’s not a casual meeting and it has to be about her.

General Hospital spoilers tease that Hayden runs off before Sam can spot her and is agonizing over her lying past catching up with her when she runs into Curtis Ashford (Donnell Turner) at her favorite haunt, The Rib. Curtis immediately notices that Hayden is flustered and agitated.

Curtis will ask her if she’s in trouble. Remember Curtis advised her before that marrying the man you know shot you is not a smart move. Will Hayden tell him that Nikolas Cassadine (Tyler Christopher) is having her investigated?

GH spoilers say look for Curtis to tell her to get out while she can, but it looks like this week’s episodes show that Hayden cannot or will not. Her gift of The Great Gatsby to Nik and her inscribing it that she is “his Daisy” is foreshadowing bad things to come in her future.

GH’s co-headwriters love classic literature and if you read Gatsby, you know that Daisy Buchanan was a woman who pretended to be something she was not – and was really selfish, shallow and devoid of ethics. Nikolas, like Gatsby, is not seeing the truth right now.

But Nikolas’ blinders will soon fall off. Sam calls to update Nikolas on the case and then she has a lead to follow – did she get it when she was checking out Baxter’s phone? Sam follows the lead and gets unexpected results. Nikolas again wonders about his marriage.

Curtis also has a run-in with his ex sister-in-law Jordan Ashford (Vinessa Antoine) and they discuss how much ugly truth they know about each other’s pasts. Fortunately Jordan and Curtis agree to keep their secrets and make a bargain of silence.

Dr Andre Maddox [Anthony Montgomery] comes to see Jordan sporting what looks like an Indiana Jones hat… They had a dinner date and Andre wonders if he’s about to get dumped for forcing the issue and taking Morgan Corinthos (Bryan Craig) from PCPD custody.

Anna Devane (Finola Hughes) will tell Paul Hornsby (Richard Burgi) that she can’t rest until “he” is in jail. Is she talking about Carlos Rivera (Jeffrey Vincent Parise), Julian Jerome (William deVry) or both? Paul also needs to deal with his Carlos problem.

Paul tells Anna that he has an idea to get what they both want and it looks like they will use Sonny Corinthos (Maurice Benard) to achieve their goals, but without his knowledge. And GH spoilers say that if Sonny ends up in jail too, all the better for the DA and his top investigator, right?

Looks like Lante is back on as Dante Falconeri (Dominic Zamprogna) tells Lulu Spencer (Emme Rylan) that he wants forever with her. Is their rough patch over? Maybe, maybe not. GH spoilers for down the road show Dante butting into Valerie Spencer’s (Brytni Sarpi) life once again so we’ll see.

Don’t miss a moment of the Tuesday March 8 episode of GH and come back to CDL every day for tons more “General Hospital” spoilers, news and more.