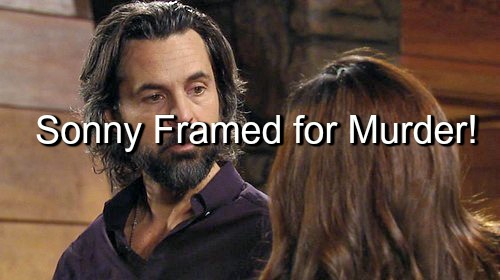 “General Hospital” (GH) spoilers reveal that on next week’s episodes Anna Devane (Finola Hughes) will hatch a plan with Paul Hornsby (Richard Burgi) to deal with their Carlos Rivera (Jeffrey Vincent Parise) problem – and Sonny Corinthos (Maurice Benard) will be their unwitting pawn.

GH spoilers tell us that Anna will come clean to Sonny that Carlos is alive and well. Of course, we all know that Paul shot Sonny even though Sonny thinks it’s Carlos that pulled the trigger. Revealing that he’s alive will put a target on Carlos and Sonny will go after his rival.

However, the question remains of how Sonny gunning for Carlos will benefit Anna’s end goal to take down Julian Jerome (William deVry) for having Duke Lavery (Ian Buchanan) killed – but no doubt that’s part of the plan because no way has Anna given up on her quest for justice.

Sonny naturally has to tell Michael Quartermaine (Chad Duell) the hard truth that not only is Carlos alive, but Sabrina Santiago (Teresa Castillo) is on the run with her baby daddy. General Hospital spoilers predict Michael will be absolutely stunned but thinks there is something more to it.

Michael is correct. Sabrina really does love Mikey but thought he had rejected her so she took off out of Port Chuck with Carlos. But the last time we saw Sabrina, she had just delivered her baby and there were complications.

Has the baby been in NICU all this time because of a problem? Was Sabrina herself sidelined because of a post-partum issue? Michael was ready to pack a bag and chase her to Puerto Rico a few weeks ago but his parents talked him down.

Now Michael will be more insistent that he needs to find her. But how will Michael’s quest to find Sabrina and keep her safe conflict with Sonny’s desire to take Carlos out once and for all? And is this plan by Paul and Anna intended to set up both Sonny and Carlos?

If Anna and Paul can catch Sonny trying to take out Carlos, they can charge both with felonies. No doubt Carlos will try and point the finger at Paul for shooting Sonny, but will anyone believe him – or will it be too late to matter?

General Hospital spoilers ask if Carlos will soon be facing down the barrel of a gun again but this time without someone to help him fake his death? Is Carlos heading for a dirt nap and Sonny facing time at Pentonville? Are Anna and Paul scheming to take down both Sonny and Carlos with this plan?

What do you think GH fans? Will Sonny continue to elude justice or will Anna lure the Teflon Don into making a misstep so Paul can make good on his promise to Sonny that he would be the DA who finally takes him down?