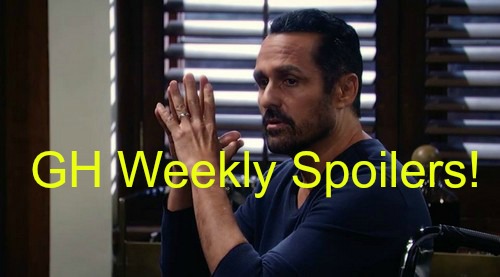 “General Hospital” (GH) spoilers for the week of Monday, January 18 through Friday, January 22 tease that Lulu’s in trouble, Valerie heats things up, the chase for Carlos and Sabrina is on and much, much more. Check out these spoilers.

First, looks like Valerie Spencer (Brytni Sarpi) will still be in danger on Monday thanks to Johnny Zacchara’s (Brandon Barash) inability to find a proper candle holder. He leaves her in danger and takes off. The cabin goes up in flames and she’s trapped.

Meanwhile, at the PCPD, Dante Falconeri (Dominic Zamprogna) puts his head together with Jordan Ashford (Vinessa Antoine) and they try to figure out why Johnny is in Port Charles and what he’s up to. They come up with a theory – will it lead back to Lulu Spencer (Emme Rylan)?

Kristina Corinthos (Lexi Ainsworth) comes clean to Sam Morgan (Kelly Monaco) about her academic suspension. Sam wants her to also tell Alexis Davis (Nancy Lee Grahn) before it’s too late. Will this set the stage for Kristina to transfer to the local PC college so she can stick around?

Sam has other things on her mind – she goes to tell Jason Morgan (Billy Miller) she has a break in his case but she finds Liz Webber (Rebecca Herbst) at the MetroCourt in Jason’s hotel room. Liz will reveal what’s going on at her house and why she’s there.

Free from danger, Valerie takes a moment to do the math on why Johnny was targeting her and the obvious answer is Lulu! Johnny won’t make it out of Port Charles and the PCPD will snag him. Hopefully, he’s nowhere near the Haunted Star or Lulu when he’s nabbed.

Robert Scorpio (Tristan Rogers) is working the Carlos Rivera (Jeffrey Vincent Parise) case with Anna Devane (Finola Hughes) and he brings around a familiar face. Who could it be? And could it lead them to where Carlos and Sabrina Santiago (Teresa Castillo) are hiding out?

Olivia Falconeri (Lisa LoCicero) finds herself in hot water but she won’t slow her roll. What’s up with that? We know she’s eying Julian Jerome (William deVry) and having happy little family dreams about him, but is this something else entirely?

Over at Crimson, Nina Clay (Michelle Stafford) is on a creative tear after turning the green issue from a sin into a win and is even more inspired for the next issue. No tax write off for Julian… Olivia gets support from someone that she used to consider an enemy – who could it be?

Sam steps up and offers to help Jason with the mystery at Liz’s house – but Liz doesn’t want her involved. Jason will agree anyway and the three will be stuck in more awkward circumstances. Sam thinks that Liz is faking all this for attention so a confrontation is brewing.

At long last, Liz will get little Jake Spencer (James Nigbor) some much needed therapy. First Liz takes him to Dr Kevin Collins (Jon Lindstrom) and the end result is Kevin and a kid shrink recommend art therapy with Franco (Roger Howarth). Liz will resist, but they insist, so it’s on!

By mid-week, Sonny Corinthos (Maurice Benard) gets some good news – is this on the professional front about the gun runners or perhaps about his legs? On the Corinthos personal side, Carly Corinthos (Laura Wright) tries to talk reason to Ava Jerome (Maura West) about baby Avery.

Is Ava finally ready to try and peacefully co-parent or will she continue to taunt the Corinthos clan? Hayden Barnes (Rebecca Budig) is under pressure to get ELQ out from under Nikolas Cassadine (Tyler Christopher) but she had gotten herself back into bed with him.

Hayden is torn between meeting Tracy Quartermaine’s (Jane Elliot) blackmail demands and falling for Nikolas. Will all her feelings change, though, when Curtis (Donnell Turner) tells her that Nikolas may have ordered her shooting?

Jordan wants Curtis out of town, but he doesn’t listen. The sexy ex-cop is sticking around for a while. Can we get a love connection for him with someone, please? If things don’t work out with Nik and Hayden, she has killer chemistry with Curtis…

By week’s end, Jason will recover a major memory that comes with more emotion. Is this a recollection of love? Family? More of his former murderous actions? Lulu is in trouble over Johnny and will go to her mom Laura Spencer (Genie Francis) for advice.

Sonny will have a breakthrough, looks like with his legs, but won’t tell anyone. Was he able to stand? A sexy new doc will be in Port Charles by mid-February and it looks like that will be Sonny’s new physician. Can’t wait!

All this and more next week on GH. Don’t miss a moment and come back to CDL often for more “General Hospital” spoilers and news.