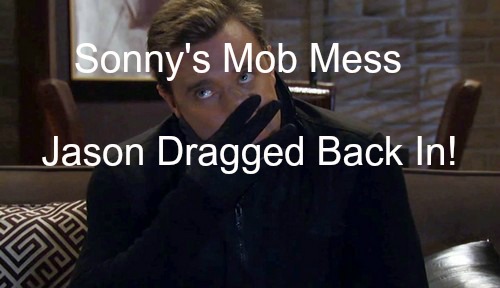 “General Hospital” (GH) spoilers tease that Jason Morgan (Billy Miller) will grow increasingly frustrated with everyone who knows him (people he can’t yet fully remember his history) and tries to pull him back into his old life. This includes the mob business that he now detests but somehow is particularly good at!

In coming weeks, as Sonny Corinthos (Maurice Benard) embarks on a bold gambit to crush his number one mob enemy Ava Jerome (Maura West), Jason may find himself pulled back into the cartel chaos. While Sonny is pulling, Carly Corinthos (Laura Wright) will outright push.

Sonny is on his way to a full recovery of his paralysis, but GH spoilers indicate he will keep that a secret for now to lure his rival into a false sense of security. But Sonny is operating under the assumption that Ava is his only foe. She’s not.

It will be this dynamic that could lead Sonny into real danger and Carly will beg Jason to bail him out, but will he? When Jason came to Sonny’s aid in the shooting, it was because he happened to be in the right place at the right time and instinct took over.

But would Jason knowingly insert himself into a violent mob conflict? Jason made it very clear to Damien Spinelli (Bradford Anderson) that he finds the mob and the violence associated with it distasteful and sees no nobility in helping keep Sonny in his criminal power position.

But if it’s life or death and Carly comes to beg him to help, could Jason resist her entreaties? What could play a major factor in how he reacts is whether he’s with Sam Morgan (Kelly Monaco) or Liz Webber (Rebecca Herbst) at the time the crisis arises – or neither.

Jason has already made a gesture that further distanced himself from Sonny and Carly when he handed them back the envelope of bail money they put up to get him out of jail for the Nikolas Cassadine (Tyler Christopher) incident.

Old Jason wouldn’t have thought about giving back the cash since bailing him out was a cost of doing business. New Jason doesn’t want to be beholden to them in any way. Even if Jason steps up and helps Sonny again, he will likely make it clear this is the last time.

Jason may, in fact, have to walk away from Sonny completely because of the inherent danger of being friends with Port Charles’ top mobster. It looks like Jason will soon choose a business suit over his black leather mob gear that Stone Cold was famous for – and make the most of his new start.

Sonny has survived the past couple of years without Jason, can he do so now? But Sonny without Jason was also what landed him in a wheelchair. If Jason had still been his enforcer, Sonny never would have been in that warehouse where he was shot – it likely would have been Jason instead.

New Jason has much more regard for life – his own and that of others – but can Carly and Sonny respect that? Stay tuned to CDL to see how the Jason-Sonny-Carly interaction ramps up when it comes to the mob life and check back with us often for more “General Hospital” spoilers, news and updates.