General Hospital (GH) Spoilers: Morgan Gets Dirty with Darby – Mob Mayhem Explodes on the Dock – Julexis Gets Ready to Say I Do 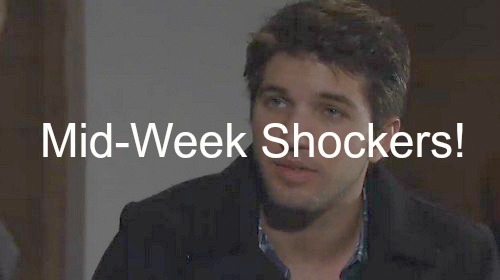 “General Hospital” (GH) spoilers indicate the latter half of this week will be insanely action-packed as Julian Jerome (William deVry) and Alexis Davis (Nancy Lee Grahn) prepare to say I do and other events turn wild then tragic. Here’s a look at what’s coming in the next few days.

Today, Alexis will start her wedding preparations with her girls at her side and we’ll see lots of tender mom and daughter moments. Julian is also preparing with Lucas Jones (Ryan Carnes) and they will do some groundbreaking bonding. Bring your tissues – this will be tear jerker stuff.

Most of Port Charles will be in attendance at the wedding so get ready to check out everyone in their finest duds as Olivia Falconeri (Lisa LoCicero) prepares to see her baby daddy wed. Sonny Corinthos (Maurice Benard) and Ava Jerome (Maura West) will also be there even though they are at odds.

But things are taking a much darker turn for another Corinthos – Morgan (Bryan Craig). Morgan has quit his meds over his frustration that they are messing with his manhood. As his guy parts start warming back up now that the meds are gone, trouble shows up.

Darby Collette (Jesica Ahlberg) comes to the coffee warehouse and makes herself available to Morgan. Those two will get busy in the warehouse and that is just the first of many bad decisions Morgan will make in coming days.

Kiki Jerome (Hayley Erin) is already self-conscious since Morgan couldn’t perform with her and now when she catches Morgan cheating with Darby, it will be nuclear. Look for a devastated Kiki to dump Morgan and tell him she’s done with him for good.

That will send Morgan spiraling deeper. Sonny will fire Morgan for screwing around with Darby at work and Morgan is close to rock bottom. When Morgan overhears about the gun shipment which coincides with the wedding day, he sees this as a shot to redeem himself in his father’s eyes.

Morgan either buys or steals a gun and prepares to take on his father’s enemies. Instead, he will shoot an innocent bystander which will horrify everyone – will it be Kiki or Lulu? This is Morgan finally hitting rock bottom and we will see him locked up – either in jail or in a loony bin – for a serious time-out.

The mob shootout on the docks is expected to tie back to the wedding events and turn the happy Julexis day into a big bloody mess. A surprise guest is expected at the wedding which may be good or bad. Will Jason Morgan (Billy Miller) be on hand or is he at Shriner’s Hospital with his kid?

If Jason is at the wedding, will he jump into the fracas and save someone? GH spoilers indicate Sonny’s big plan to take down Ava this week will go horribly awry. Ava may not be taken out by Sonny but will be devastated to find out Morgan shot someone.

This week will end in tears of joy for the wedded couple and tears of anguish for many others. Don’t miss a moment of these shows – they promise to be action-packed, emotional and fast paced. Be sure to check back with CDL often for more “General Hospital” spoilers.