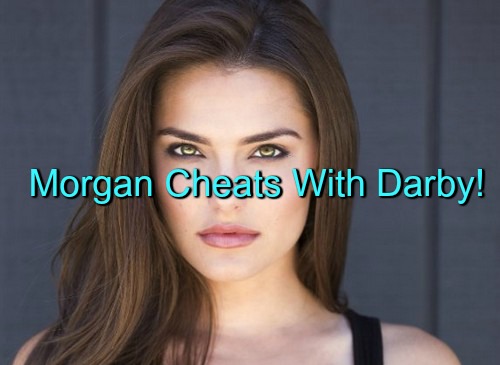 “General Hospital” (GH) spoilers indicate that Morgan Corinthos (Bryan Craig) is on the cusp of screwing up everything in his life – from his job to his rekindling romance with Kiki Jerome (Hayley Erin). Morgan will soon make some major missteps that cost him everything – and could cost someone their life.

We know that Morgan is extremely frustrated about his “performance” issues with Kiki thanks to his bipolar meds making his junk non-functional. We saw Morgan toss his meds in frustration and this means working penis, but poor judgment.

So that’s when Darby Collette (Jesica Ahlberg) shows up. She’s been macking on Morgan hard and doesn’t miss an opportunity to lift her skirt for him. Morgan and Darby will get busy in the coffee beans and GH spoilers indicate Kiki may catch Morgan in mid-shag with the skank.

Kiki is going to hate finding out that Morgan cheated with Darby for two reasons. First, he’s cheating when he just told her he cares about her, wants a relationship, and is done with good-time Darby. Second, when Kiki wanted to get busy, he couldn’t perform – and now he’s going to town on Darby.

That will wound Kiki in a major way and she’ll tell Morgan to go to hell – or something similar – and make it clear they are done for good. To ice the emotional cake, Sonny Corinthos (Maurice Benard) finds out that Morgan was using the coffee warehouse to get his groove on.

Sonny tries to have a heart to heart with Morgan but that goes south – and Sonny ends up firing his kid. So there’s Morgan with no bipolar meds, no Kiki, and no job – plus Sonny will make it clear he’s disappointed in Morgan’s poor choices. That’s a recipe for disaster.

Morgan knows something about the gun deal with Raj that’s going down on Feb. 19 the rejected son learns more – so he decides he needs to “help” his dad out as a chance to prove himself. Morgan gets a gun and lurks at the docks to make sure he doesn’t miss out on the action.

Unfortunately, Lulu Spencer (Emme Rylan) is also down there – she decided to move out of Maxie Jones’ (Kirsten Storms) place since three (and baby makes four) is a crowd with Nathan West (Ryan Paevey) also moving in.

That puts Lulu in a bad spot. But Kiki may also be the one in danger. GH spoilers indicate that Carly Corinthos (Laura Wright) has bad news to break to someone and that Ava Jerome (Maura West) also has a moment of dread.

So will Morgan shoot Lulu? Kiki? Someone else? GH spoilers hint that Morgan makes a misstep that puts someone in life-or-death danger, but who it is remains to be seen. Sonny’s plan to take down Ava and Raj will go horribly awry and this could tear the Corinthos family apart.

What do you think GH fans? Who will Morgan accidentally shoot? And does he deserve to be behind bars in Pentonville for his actions – or in a padded playroom at Shadybrook? Share your comments below and come back to CDL often for more “General Hospital” spoilers and news.