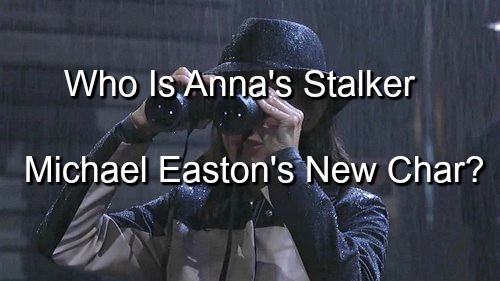 “General Hospital” (GH) spoilers reveal that Anna Devane (Finola Hughes) has a secret stalker that we will soon see more of – is this a bad guy or good guy on the sexy Brit’s tail? We saw a couple of weeks ago after Anna left the Floating Rib that someone followed. Is this tied to Michael Easton’s return?

In case you don’t recall, Anna was having a drink at The Rib and on the phone with Mac Scorpio (John J York) talking about Paul Hornsby’s (Richard Burgi) mystery daughter Susan Hornsby. This may not have caught the eye of many fans since it was the same time that JaSam was heating up again.

But this was obviously major foreshadowing of something about to go down with Anna. She left the Floating Rob and someone followed, but Anna did not notice. There were several people in or around the Rib right then that we can eliminate since they were busy – Andre, Jordan, Sonny, Michael and Carly.

Plus, aside from Andre and Jordan, none had a reason to follow Anna – and Andre Maddox (Anthony Montgomery) and Jordan Ashford (Vinessa Antoine) wouldn’t have gone creeping after Anna… So who is this mystery stalker and are they good or bad?

Is it someone we already know or someone new in town – perhaps a fan favorite actor in a new role?

On the good guy side, it could possibly be Robert Scorpio (Tristan Rogers) or Mac Scorpio following her. Both are concerned about her interactions with Paul and might be worried he could pose a danger to Anna. They may be stalking her in a protective fashion looking for other threats.

However, we can all admit it would be much more exciting if it was a bad guy stalking Anna. But who could it be. The three that spring to mind are Cesar Faison (Anders Hove), Carlos Rivera (Jeffrey Vincent Parise) or Jerry Jacks (Sebastian Roche).

Of course Jerry is supposed to be locked up, but that hasn’t stopped him before. The evil Jacks brother may be looking for revenge for when Anna and Robert nabbed him on Cassadine Island and had him thrown in the clink.

Carlos might be there at the request of Sabrina Santiago (Teresa Castillo) and wants him to help Anna get justice for Duke Lavery (Ian Buchanan) by giving evidence to help her nail the former mobster who had her true love killed off.

Another interesting possibility has to be Cesar. We know he’s on the loose hanging with Britt Westbourne (Kelly Thiebaud) and Cesar has an unquenchable lust for Anna. He’s crazy for her in a way that won’t die out. Maybe he’s back because he heard she’s single once again…

BUT WHAT IF IT’s MICHAEL EASTON’s NEW CHARACTER???

We don’t yet know anything about Michael Easton’s new character. Some have speculated that he might be a new Cassadine or a mobster of some sort. He could still be all of that but could be someone that Anna has a past with – who is back in her life to make trouble – or make love…

What do you think GH fans? Who’s lurking in Anna’s shadow? Do they mean her harm? Or are they trying to protect her? Could it be Michael Easton in his new role? Share your comments below and come back to CDL often for more “General Hospital” spoilers and news.