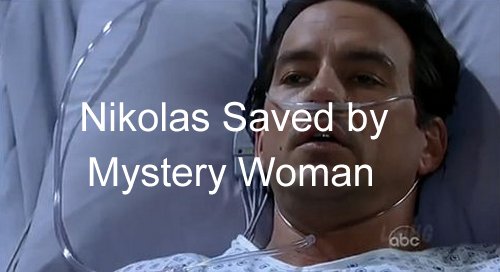 General Hospital (GH) spoilers reveal that Cassadine Island is about to get a bit more crowded when a new face in the form of a mystery woman shows up in next week’s episodes. There’s a mystery woman coming the week of July 25 and she may be the one to both save Nikolas Cassadine (Tyler Christopher) and be Athena’s mom.

When Nikolas was shot by Valentin Cassadine (James Stuart), that was the departure point for Nick Stabile, but General Hospital spoilers tease that Tyler Christopher will be back soon and the character of Nikolas will survive what seemed like certain death.

This is the third time within a year that Nikolas will survive a balcony “accident” – that’s a fun plot fact. Remember Jason Morgan (Billy Miller) tossed him off the MetroCourt balcony, then Nik faked a fall to set up Hayden Barnes (Rebecca Budig) and now he’s really fallen to what seemed like doom.

Laura Spencer (Genie Francis) is distraught that she grieved Nikolas, got him back, and has now lost him again. But General Hospital spoilers tease that Nikolas may not be dead despite what seemed like the direst of circumstances during his tussle with Valentin.

Could this mystery woman be the one that saves Nikolas? The balcony led to a sheer drop, but if Nikolas hit water instead of rocks, he may yet be alive. Does this woman have the medical knowledge to save the Prince? Will we meet her as she’s caring for Nik rather than at the main house?

There are many secrets going on at Cassadine Island that Nikolas didn’t know about and this woman may be part of it. Is she the mother of Athena (Jazmyn Skye Vale), the little girl that spent time with Jake Webber (Hudson West)? Is she perhaps a doctor?

Cassadine Island had extensive laboratories and we know Helena Cassadine (Constance Towers) did some experiments there – perhaps even on Jason, so this woman may have medical knowledge because she worked in the Cassadine Labs.

Other General Hospital spoilers for the island plot hint that Nikolas will have a “vision of love.” Could that be because Nikolas is delirious from his injuries and sees this mystery woman as some angel that has saved him from certain death?

There is still much more story to come on Cassadine Island before this plot winds down. Spoilers hint that Hayden will get a message from Nikolas – will it be sent from the woman when she finds Nik’s phone on him?

Other spoilers tease that Liz Webber (Rebecca Herbst) and Franco (Roger Howarth) will head to the island soon after Jake tells Franco about the little girl he knew there – and this mystery woman. Once they arrive, they will hide out with Jason, Sam and Hayden.

Franco and Liz are trapped and this woman may be the one that saves them too. What will they learn from her and how many lives will she end up saving before all is said and done? Was this woman an ally of Helena’s or someone also held there against her will?

What do you think GH fans? Did Nikolas survive the fall? Is it the mystery woman that saved him? Who is she and what secrets does she know that can help the Port Charles people? Share your comments below and check back with CDL often for the latest General Hospital spoilers and news.