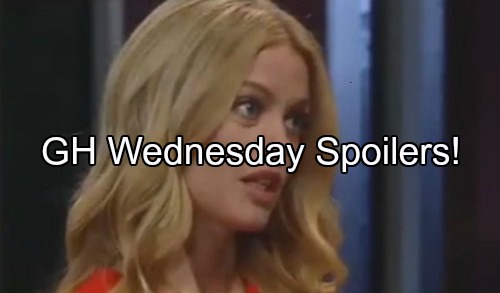 General Hospital (GH) spoilers for the episode on Wednesday, July 5, hint that Sam and Jason will stumble into a trap chasing Nik, Sonny worries about Alexis, Claudette stuns Nathan with an admission, and Griffin has an unwelcome chat with Maxie.

Anna Devane (Finola Hughes) and Alexis Davis (Nancy Grahn) are determined to take down Julian Jerome (William deVry) for the Carlos Rivera (Jeffrey Parise) killing and Alexis will make the bold move of wearing a wire to try and get a confession from her hubby.

Anna, Paul Hornsby (Richard Burgi) and Jordan Ashford (Vinessa Antoine) lurk outside the house in a police van listening in on the wire as Alexis tries to trap Julian into a murder confession. Julian is still unaware that Alexis is lying about the pregnancy.

Julian will tell Alexis that he an idea to keep her out of jail but Alexis keeps pressing him to confess to the cops that he killed Carlos to save her. However, all she needs is him to confirm the killing and she can nail him, but Julian will hedge and when she presses, he becomes suspicious.

General Hospital spoilers reveal that Sonny Corinthos (Maurice Benard) shares his concerns with Carly Corinthos (Laura Wright) about Alexis. He’s worried on two fronts – first that Julian might harm Alexis if he figures out she’s setting him up.

Second, Sonny is worried that Alexis won’t get the confession from Julian and she’ll end up on trial and convicted for the killing. Sonny and Carly will spend time with baby Avery while discussing Alexis and waiting for the fireworks to start.

Fireworks are already kicking off at the MetroCourt when Nathan West (Ryan Paevey) is stunned to see Claudette (Bree Williamson) in the hotel room and discovers she’s the one who lured him there. General Hospital spoilers hint that Nathan tells his ex to leave town at once.

However, Claudette just landed a job at Crimson and makes it clear she’s sticking around. Claudette stuns Nathan with an admission and it won’t be long before Maxie Jones (Molly Burnett) finds out that she just handed a job offer to her fiancé’s ex-wife.

But first, Maxie talks to a tormented Griffin Munro (Matt Cohen). Maxie presses Griffin on why he left the priesthood but Griffin is in a raw state after the GH killer interrogation by Nathan. After Nathan asked him about being a doc in NYC, Griffin wanted to come clean.

But then the Claudette call sent Nathan away before Griffin could work up the nerve to tell him that he’s the one Nathan shot. Now Griffin is teetering and considering revealing the truth to Maxie. If he doesn’t tell soon, it’ll be Claudette that breaks this ugly truth to both men.

Over on Cassadine Island, Ava Jerome (Maura West) and Nikolas Cassadine (Nick Stabile) browse the family’s wine cellar and then something terrifies Ava and she screams. Is it a rat? Or something worse? The scream serves as a directional clue to others in the house.

Sam Morgan (Kelly Monaco) and Jason Morgan (Billy Miller) have just arrived to the family HQ looking for Nikolas. They will follow the sound of Ava’s scream to the wine cellar and Ava and Nik will be stunned to see the Port Charles peeps.

But Jason’s feeling of triumph will be short-lived when the four of them end up trapped thanks to someone else on the island that all four were unaware of – danger is lurking! Look for the Cassadine Island adventure to kick into high gear this week.

All this and more on the GH episode for Wednesday, July 6. Don’t miss any of the action and then check back with CDL for all the latest General Hospital spoilers and news.