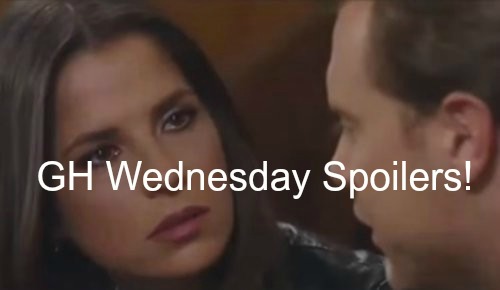 “General Hospital” spoilers for Wednesday, January 6 hint that Jason Morgan (Billy Miller) and Sam Morgan (Kelly Monaco) may be on the cusp of finding love again. While at their former apartment, Jason reveals that he had another memory of her – and this one had feelings associated, not just pictures.

Do we sense sparks there? Could something happen? Will they get the kiss they missed out on at New Year’s Eve? Speaking of sparks – Alexis Davis (Nancy Lee Grahn) may soon be seeing green. She runs into Olivia Falconeri (Lisa LoCicero) who has no idea she and Julian Jerome (William deVry) are engaged.

Alexis will wonder why Julian didn’t tell his baby mama the big news and why Olivia seems to be having an emotional reaction to the news. What’s going on there? Anna Devane (Finola Hughes) and Jordan Ashford (Vinessa Antoine) have a run in with Andre Maddox (Anthony Montgomery).

Anna is surprised to learn the two know each other – and wants the details. Was this a romance from Jordan’s past? Did they work together? Go to college together? What’s the deal? Is this heading for a love triangle since Anna and Andre have great chemistry and now this with Jordan?

Anna also needs to catch up with Mac Scorpio (John J York). He’s the only one who knows all about the investigation into Paul Hornsby (Richard Burgi). Anna is keeping a lot of facts of the case from Jordan for reasons we don’t yet know.

Anna will have to confess to Jordan soon that she shot Carlos Rivera (Jeffrey Vincent Parise) but for now, Anna is playing her cards close to the vest. Will it work out? Anna also needs to talk to Sabrina Santiago (Teresa Castillo) about Carlos but wants to play that carefully.

Will Anna scare Sabrina into labor with Carlos inquiries? Is Carlos lurking nearby to keep an eye on very pregnant Sabrina? Michael Quartermaine (Chad Duell) is concerned about Sabrina and will soon get a letter that may change his outlook.

Looks like Patrick Drake (Jason Thompson) and Robin Scorpio (Kimberly McCullough) might be relocating to California! Patrick’s dad mentioned a chief of staff offer at a hospital where he serves on the board and Robin and Patrick seemed certain as they told Sonny they were moving on from GH.

Now they just need to break the news to Emma Drake (Brooklyn Rae Silzer) that they are engaged and planning to move. Emma might miss Port Charles, but having both her parents united and remarried will be enough to cushion the blow. It’s wedding planning time!

Over at the PCPD, Liz Webber (Rebecca Herbst) stops by to check on the incident at her house and has Jake Spencer (James Nigbor) in tow. Franco (Roger Howarth) is also there – but why? Is he checking on some prisoners he’s going to do art therapy with or is this about his car from the Kiki DUI incident?

Franco notices that Jake seems a little odd and is concerned since Liz is his new pal. He also eavesdrops on Liz talking to the officer about the man lurking around their house. Does Franco notice something about Jake as they’re talking?

GH spoilers indicate that Franco will soon sit down with Jake for some art therapy – perhaps over this incident – and he could help Liz understand more about what’s going on with her son. If anyone understands crazy, it’s Franco.

Meanwhile things look like a disaster over at Crimson as Dillon Quartermaine (Robert Palmer Watkins) notices a major mistake in the magazine when they receive it. Is Nina Clay (Michelle Stafford) going to be in trouble over this?

GH spoilers tease that the magazine will be a big hit anyway – much to Julian’s chagrin. What could the faux pas be? Is it a nip slip? Looks like Nina, Maxie Jones (Kirsten Storms) and Dillon will conspire to figure out how to bounce back from this.

All this and more on the Wednesday, January 6 episode. Watch then come back to CDL for more “General Hospital” spoilers, news and updates.