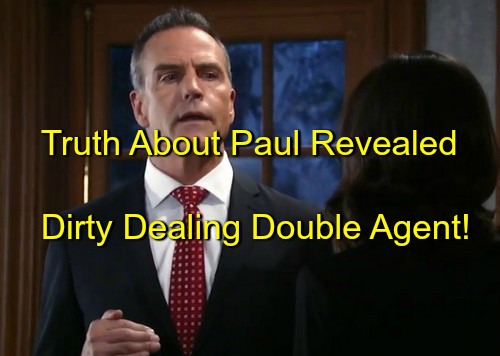 “General Hospital” (GH) spoilers reveal that Paul Hornsby (Richard Burgi) may be in danger during the gun deal with Dixon (Troy Ruptash) but should be able to talk himself out of trouble. But is Paul really an undercover agent or is he dirty at the core and this is all part of a master double dealing scheme?

We know that Dixon will get away from Paul and end up at the church to wreak havoc on the Julexis wedding. And Paul should come out of this intact because GH spoilers indicate that Jordan Ashford (Vinessa Antoine) will confront Paul and Anna Devane (Finola Hughes) about the gun deal.

That means Paul must survive to be chastised for not alerting the PCPD chief about the sting operation. Paul has told Anna – and will tell Jordan – just enough to convince them he’s really undercover, but that doesn’t explain all of his actions while in Port Charles.

Some of his dirty deeds cannot be justified or explained by him partaking in an arms dealing sting operation. Let’s consider…

First, Paul killed Kyle Sloane (Robb Derringer) in cold blood – that’s not something an undercover agent does. Perhaps in self-defense, but that was not the case. He shot him, kicked him into the harbor, then passed his body off as Carlos Rivera’s (Jeffrey Vincent Parise).

Second, Paul’s interactions with Carlos are troubling. Paul lied and told Anna that Carlos saw him shoot Sloane and was blackmailing him. That’s clearly not true. Paul was paying off Carlos and urging him to leave town – he was the one in power in that dynamic.

Third, unless Carlos is a CI that Paul has cut a deal with, the way he’s handling Anna’s pursuit of Carlos screams corruption and lies. After all, Paul sent Canadian cops to scoop up Anna and Robert Scorpio (Tristan Rogers) to give Carlos time to get away.

Fourth, Paul stole the evidence on Ava Jerome (Maura West) that would put her away for killing Connie Falconeri, blackmailed her into illegal activities, leveraged her into having sex with him, then threatened her time and again. That doesn’t seem like undercover cop actions.

Fifth, Mayor Lomax (Shari Belafonte) is dirty and it looks like Paul has a cozy relationship with her. In fact, he implied that he slept with the corrupt mayor to score the DA job. He also knows that she got her seat as the result of a rigged election, but doesn’t seem to care.

Overall, Paul’s actions are inconsistent with those of an undercover cop. There’s too much violence in him – plus he confessed to Ava that he shot Sonny Corinthos (Maurice Benard). Undercover agents don’t get to assassinate mobsters for sport.

Clearly Paul is something more than what he claims to be. He lied to Anna about why he killed Sloane and how that went down. Paul’s accusations that Sloane brutalized his estranged daughter Susan were likely also contrived to gain sympathy from Anna and could be complete fiction.

What may be happening is that Paul was gun dealing for real, but when Anna and Sonny got too close to figuring out what was going on, Paul may have contacted some federal law enforcement people he knows and created the sting after the fact. That could be why backup won’t show up in time.

Paul may be just a dirty lowdown criminal who happens to have a white collar legal alter-ego and this whole gun deal bust may be his creation to clean up his dirty laundry so he doesn’t get busted because his plans didn’t work out.

What do you think GH fans – is Paul really an undercover agent – or is he just a criminal in a nice suit with a law degree who’s trying to cover his crimes with creative lies? Share your thoughts below and come back to CDL often for more “General Hospital” spoilers and news.