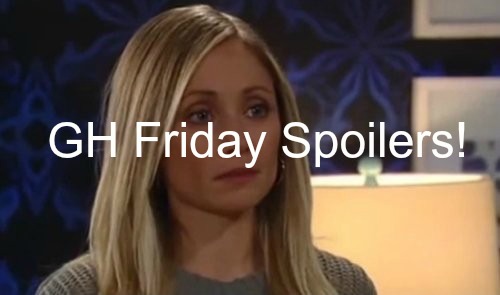 “General Hospital” (GH) spoilers for the cliffhanger show on the Friday, January 22 episode reveal that Jason has a major memory revelation, Dante contemplates the end of his marriage, and Nik and Hayden take a big step. Check out these spoilers.

Liz Webber (Rebecca Herbst) pleads with Jason Morgan (Billy Miller) to believe her that she is not the one setting up the scares at her house. Sam Morgan (Kelly Monaco) told Jason not to fall for it and Jason has his guard up – rightly so.

The problem is, this time Sam has it wrong, but Liz likely won’t be able to make Jason see that. After Jason and Liz bicker, he’ll leave and Liz will be upset about Sam making false accusations. Will little Jake Spencer (James Nigbor) hear all this and step up his antics? Will Jake turn on Sam soon?

Sam, meanwhile, is with Carly Corinthos (Laura Wright) at the MetroCourt bar. They’re talking about Jason and Carly tells Sam she’s going to be honest with him – but what’s the subject matter? Is this back to what Sam was just talking about with Jason related to Franco (Roger Howarth)?

GH spoilers tease that Jason and Franco’s past is going to become an issue soon and Carly is already spoiling to have Jason go after Franco. But this is a dilemma, since Franco is bonding with Jake and may be the best person to help Jason’s son through his dark episode.

Later, Jason and Sam spend some time together and he recovers a major memory about the two of them. GH spoilers video this week showed Jason remembering a romantic night where the two of them danced in the rain. This will hit Jason hard.

Sam is with him and notices something is going on and asks him what he’s recalling. He’ll tell her and she’ll confirm what he recalls really happened. This could be the catalyst for JaSam to reignite – will we finally see a long overdue, passionate kiss between Jason and Sam?

News flash – now we know Curtis (Donnell Turner) is TJ Ashford’s (Tequan Richmond) uncle. But whose brother is he? Is he Shawn Butler’s (Sean Blakemore)? Jordan Ashford’s (Vinessa Antoine) dead ex-hubby’s brother? Or even Jordan’s herself?

If Jordan and Curtis are siblings, there are deep issues there because she’s not happy to see him. Jordan wants Curtis out of town and doesn’t want him near TJ. However, Curtis seems to have a deeper agenda when it comes to Hayden Barnes (Rebecca Budig) and isn’t leaving town.

Speaking of Hayden, Nikolas Cassadine (Tyler Christopher) admits he loves her and Hayden wants to love him but isn’t sure. Curtis’ words are haunting her. Hayden will pull back and admit she’s scared to love him like this. Will Hayden tell Nik she knows he had her shot?

GH spoilers indicate that Nikolas will make a surprising move that could put ELQ and his finances at risk if the gamble doesn’t pay off. Is he ready to seal the deal with Hayden and propose (or accept her proposal)? Big things are coming for these two…

Laura Spencer (Genie Francis) is furious with Lulu Spencer (Emme Rylan) for harboring fugitive Johnny Zacchara (Brandon Barash). She wants to know what she was thinking and how she could be so stupid. By now, Laura has to know that Valerie Spencer (Brytni Sarpi) almost died.

Lulu tells her mom she thinks she’s ruined her relationship with Dante Falconeri (Dominic Zamprogna) for good and wants her mom to tell her what to do. The fact is, even though Val probably wants nothing more to do with Dante, the marriage may be irreparably broken even without the third wheel.

Dante is also venting about Lulu to his dad and brother. He’s hanging with Sonny Corinthos (Maurice Benard) and Michael Quartermaine (Chad Duell) and tells them that Lulu was working with Johnny and nearly got her cousin killed.

What sage advice will he get from his pops? Sonny knows a thing or two about vengeful women, but he also hates Johnny and won’t like that Lulu was aiding and abetting his former mob rival. Dante tells them he thinks he and Lulu are done – is there not even a glimmer of hope?

Also, Sonny will have a breakthrough with his medical condition – what could it be? Can he now move both legs? Does Sonny stand? He won’t tell anyone but Epiphany Johnson (Sonya Eddy) will find out – maybe she spots him at it – and he has to swear her to secrecy.

Don’t miss a moment of Friday’s big cliffhanger show on January 22. Then be sure to come back to CDL for more “General Hospital” spoilers and news.