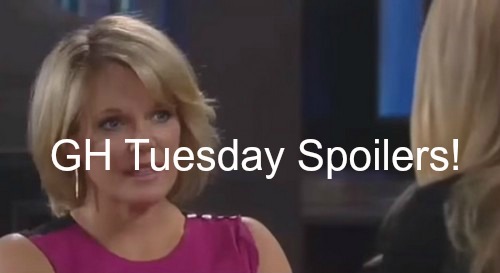 “General Hospital” (GH) spoilers tease a lot of Corinthos and mob action on the Tuesday, January 12 episode. Paul and Sonny make moves, Morgan and Michael see the truth, and Kiki and Ava hit a roadblock. All this and more – check out these hot GH spoilers.

First, Sonny Corinthos (Maurice Benard) is seen trying to help someone. Looks like he’s out and about and someone needs assistance – but Sonny is stuck in that wheelchair. What will he do and who is Sonny trying to assist?

Down on the docks, Paul Hornsby (Richard Burgi) meets with a mob associate and threatens him over a payment that’s past due. The guy looks like one of the gun runners. Little does Paul know, Anna Devane (Finola Hughes) is closing in on him and Carlos Rivera (Jeffrey Vincent Parise).

Anna decides to shake down Sabrina Santiago (Teresa Castillo) for a lead on Carlos. Will Sabrina cave when confronted? Anna will call in Robert Scorpio (Tristan Rogers) to work the case with her and Jordan Ashford (Vinessa Antoine) soon – how much longer can Carlos hide?

Sabrina also talks with Michael Quartermaine (Chad Duell) who seems to have second thoughts about dumping her. Sonny encouraged Michael to reconsider, so is he? But is it too late? Does Sabrina see all the Carlos trouble closing in and wants to spare Michael the danger and drama?

Also dealing with Paul’s mob stuff is Ava Jerome (Maura West) but she’s been trying to keep it quiet. But after a talk with Kiki Jerome (Hayley Erin), her daughter suspects that her mom may be back to her old Jerome cartel tricks. Will Kiki tell anyone? She’s pretty annoyed at Ava, so she might!

Morgan Corinthos (Bryan Craig) turns up for therapy with Dr Andre Maddox (Anthony Montgomery) and talks about how he’s the black sheep of the family and feels out of place. He doesn’t want to disappoint his family, but Morgan feels like that’s all he does anymore.

Later, Morgan and Kiki will chat. They continue to grow closer as friends – will she share her suspicions about Ava? If so, will this set Morgan off down a path he should not follow? Later, Jordan gets a gift – is it something from Ava? Or from Johnny Zacchara (Brandon Barash)?

Johnny was upset when Lulu Spencer (Emme Rylan) rejected him and ran out of the Haunted Star. Will that lead him to immediately amp up his revenge plan against Valerie Spencer (Brytni Sarpi)? When will Johnny leak the photos of her taking the bribe – is that what Jordan gets?

All this and more on the Tuesday, January 12 GH. Watch then come back to CDL for more detailed “General Hospital” spoilers, news and updates.