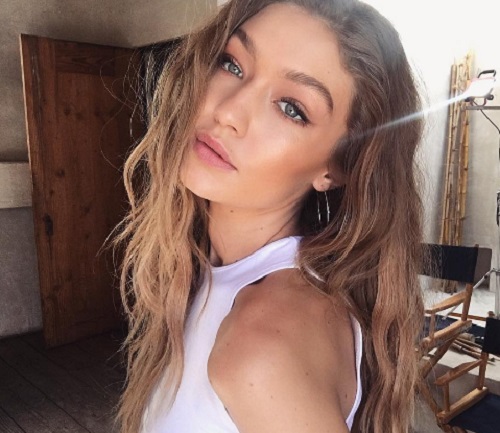 Gigi Hadid is under fire after she mocked the future first lady Melania Trump while she was co-hosting the “American Music Awards” with Jay Pharoah. Jay Pharoah, who is known for his spot on celebrity impressions, joined her soon thereafter with an impression of Donald Trump.

Gigi started her impression by telling the audience that she’s been working on this and first she had to “get her face right”. She then turned around with pouted lips and said in a European accent “I love my husband Barack Obama and our children Sasha and Malia”.

The line was a reference of an Internet joke that stemmed from the fact that Melania Trump allegedly plagiarized parts of first lady Michelle Obama’s speech at the Republican National Convention a few months ago.

The impression received many laughs at the awards show but at home it got mixed reviews: some praising how funny it was and some calling Gigi Hadid a “racist hypocrite” (Hadid’s parents are immigrants).

It wasn’t all positive reviews though.  Some AMA viewers were offended that Gigi Hadid was roasting the new President and his wife.

One of the angry tweets read, “Lost all respect for @GiGiHadid tonight! How tasteless to mock your next president #classless #tasteless #amas #byegigi.”  And, a lot of other Trump fans were pretty upset by the Melania impersonation.

A few tweets even referred to Hadid as a “hypocrite” and a “racist” and pointed out that her own parents were not born in America and she had no right to poke fun at Melania’s accent so perhaps she should be extra sensitive.

Jay Pharoah also added one of his iconic impressions to the show which was arguably better than Gigi’s (seeing that he does it for a living).

“I love Bruno Mars. I don’t know what color he is, so I can’t deport him,” Jay said as Trump.

The night had lots of other wow moments too including the triumphant return of Selena Gomez and more amazing performances.

Gigi did share an apology on Twitter for the jokes, but Hadid pointed out that she too has been the center of comedic skits in the past, and being roasted is just a part of show business.  Interestingly, Gigi also revealed in her hand-written note on Twitter that she removed some of the jokes from the script that she thought were “going too far.”

What do you think about Gigi Hadid’s impression? Did you find it funny? Or were you offended? Be sure to voice your opinion and let us know your thoughts in the comment section below.

Don’t forget to check CDL for all the hot news and updates about Gigi Hadid.

Rehearsal vibes.. 🎤☕️ Tune in TONIGHT as @jaypharoah and I host the @AMAs .. 8|7c on @abcnetwork #AMAs