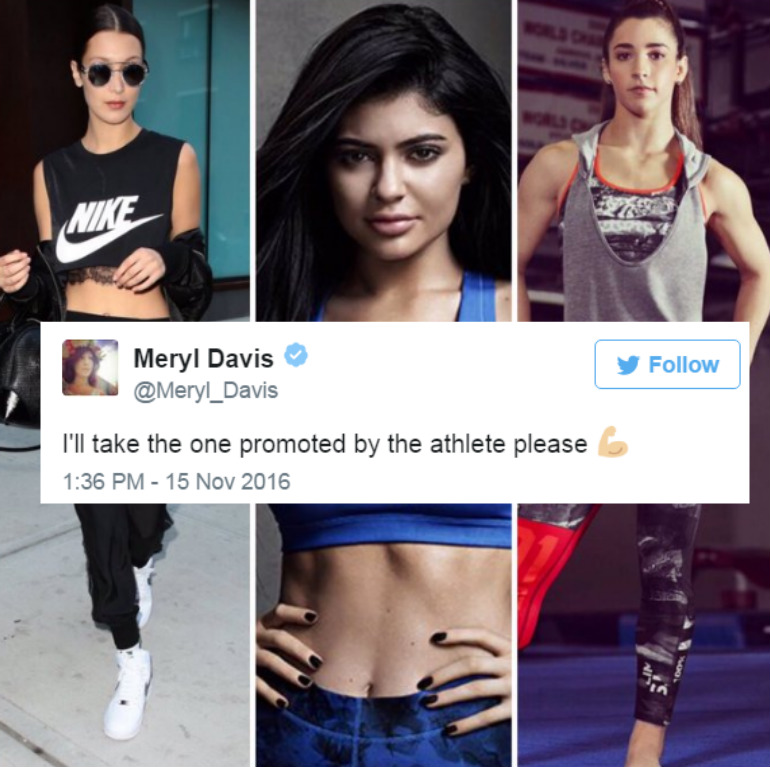 Yolanda Hadid has a history of going into full on Mama Bear mode when it comes to her kids and this time she went HAM on Olympic Gold Medalist Meryl Davis over a comment she made about Bella Hadid’s new Nike campaign.

Bella Hadid revealed in an Instagram post that she is the newest spokesmodel for Nike by posting her picture with her decked out in Nike sportswear on a street in New York City standing in front of a massive billboard of her ad for the brand. Bella Hadid stans everyone praised and applauded the picture as it racked up likes.

Apparently it didn’t sit well with Olympian Gold Medalist Meryl Davis. She posted a collage that included pictures of Kylie Jenner in Puma, Bella Hadid in Nike and actual athlete/Olympic gymnast Aly Raisman in Reebok with the shady caption that reads “I’ll take the one promoted by the athlete please”.

Twitter flooded with the same sentiments of being exhausted by non-athletic celebrities posing for or collaborating with athletic companies. In addition to that many people felt that Bella looked too skinny in the photo that she shared.

Yolanda Hadid caught wind of the situation and struck back. She posted a comment saying “You obviously don’t have to be an athlete to wear or enjoy Nike wear” according to TMZ. She didn’t stop there, Yolanda Hadid went on to make a congratulatory post of her own about her daughters’ new accomplishment. It didn’t even stop there, she posted ANOTHER picture of Bella on horseback at a competition with the caption “Always remember who you were before the world told you who you should be…@ballahadid #athlete #horselover”

If you’re unaware of Bella Hadid’s horse-riding history, Yolanda posted on her Bravo TV blog that Bella had to quit riding horses and give up her shot to be a champion rider in the Olympics due to Lyme Disease, which her and her super hot model brother Anwar Hadid suffer from.

After the drama she caused Meryl Davis gave Entertainment Tonight an exclusive statement saying “As someone who has experienced just how hurtful comments on the internet can be, my intention is to promote the use of a diversified ideal of beauty and support the role I believe female athletes can play in the pursuit of that.”

Do you think Yolanda Hadid went too far? Or was she justly defending her daughter? Or do you think Meryl Davis was right? Since Nike earns over 99% of it’s revenue from customers who are not professional athletes, what’s wrong with using a model like Bella Hadid? Let us know in the comment section below.

❤️Always remember who you were before the world told you who you should be…. @bellahadid #athlete #horselover

I’ll take the one promoted by the athlete please 💪🏼 pic.twitter.com/MRe1baOBtX