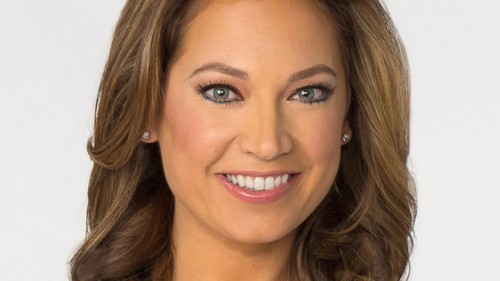 Is Ginger Zee OUT at DWTS? Dancing With The Stars 2016 spoilers tease that Ginger Zee and Val Chmerkovskiy may not be performing in the Season 22 finals tonight on Monday May 23. Like many of her competitors this season, Ginger Zee suffered a serious injury at rehearsals – and now it is up in the air if she will even be able to dance against Paige VanZant and Nyle DiMarco for the Mirror Ball Trophy.

According to a report leaked by ABC News, Ginger Zee suffered an injury to her pelvis and is having painful back spasms, the Good Morning America meteorologist wasn’t even able to rehearse over the weekend for the big finale. Pro dancer Jenna Johnson has been reportedly standing in for her.

Ginger Zee explained to ABC News, “My pelvis is very loose and unstable…because I just had a baby.” Zee went on to explain that according to her physical therapist, her pelvis is “an inch off from where it is supposed to be” and has been “moving all over” while she has been dancing in Season 22 of DWTS.

Ginger Zee has been on bed rest the last few days and is trying to recuperate, according to ABC News, it is unclear whether or not Zee will take the dance floor during the Dancing With The Stars finale. Ginger and her physical therapist will make the decision before the show.

Of course, if Ginger and Val don’t dance tonight on the finale, then they automatically forfeit and will finish in third place. The winner will be between Paige VanZant and Nyle DiMarco.

Dancing With The Stars spoilers have been hinting that Ginger Zee was a frontrunner for the Season 22 Mirror Ball Trophy. The ‘GMA’ host actually had a good chance of beating model Nyle DiMarco, he lost a lot of fans’ support with his attitude recently.

So DWTS fans, do you think that Ginger Zee will dance tonight? Or will she and Val Chmerkovskiy forfeit? If Ginger doesn’t take the stage, who do you think will win? Paige VanZant or Nyle DiMarco? Let us know what you think in the comments below and don’t forget to check CDL for all of your Dancing With The Stars 2016 spoilers and news!