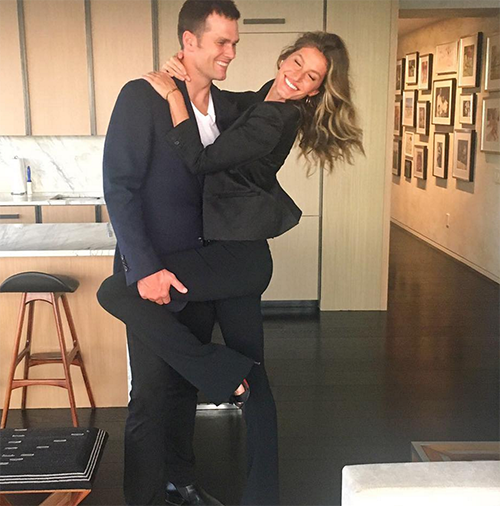 Is Gisele Bundchen loosening up when it comes to her husband Tom Brady and the couple’s strict marriage rules? That’s what fans can’t help but wonder as the Brazilian supermodel was spotted by the paparazzi eating junk food with her NFL superstar husband during their vacation in Italy this week.

Both Gisele Bundchen and Tom Brady are known for the hard work and dedication they put into maintaining their almost perfect bodies. After all, Gisele has long been considered one of the sexiest supermodels in the world while Tom Brady also a talented quarterback with several Super Bowl wins behind him. And even though the couple is very strict with their raw diet – which includes 80 percent vegetables and 20 percent lean meats – it looks like they are making some major changes to how they approach their meals. Or are they doing it to save their marriage?

After all, there’s only so many ‘rules’ someone like Tom Brady can take, especially being married to a high-maintenance woman like Gisele Bundchen. This is the same woman who boasted of making her husband pancakes the day after she gave birth to her first child and, of course, shamed other mothers for not breastfeeding their children enough. As far as Gisele is concerned, she wants the public to see her life as perfect, and that includes the way both her husband and children look, too.

But are Gisele’s strict rules causing friction for the married couple? Is the Brazilian model’s obsession with perfection putting distance between her husband and her? Of course, only Tom and Gisele know, but for now it looks like Gisele has no choice but to give Tom the freedom he wants and deserves, especially when it comes to eating cheat meals like French fries and dessert during their vacation. The last thing Gisele wants is for her Tom to have one foot out the door, as it would only shatter the well-curated public image of a happy marriage and happy family that she’s worked on for so long.

Tell us CDL readers, what do you think? Is Gisele Bundchen finally giving Tom Brady a little room to breathe in their marriage? Is the supermodel loosening her grip on him? Or has Tom finally put his foot down? Let us know what you think by dropping us a line in our comments section below!

Happy Birthday my love! We miss you and wish we could be with you today. Sending you all our love. May this year bring you so much joy and fulfillment. We love you!! ❤🎂✨😘 Feliz aniversário meu amor! Nós estamos com saudades e queríamos estar com você hoje. Receba todo nosso amor. Que esse ano lhe traga muitas alegrias e realizações. Nós te amamos!