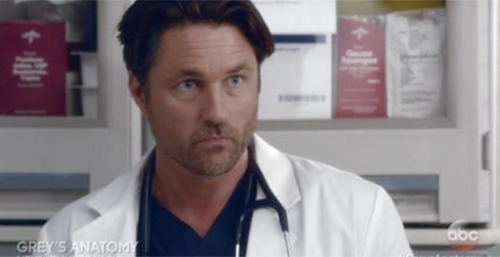 Tonight on ABC their hit drama Grey’s Anatomy returns with all-new Thursday, October 20, 2016, season 13 episode 5 and we have your Grey’s Anatomy recap below. On tonight’s episode, in the Season 13 episode 5, a bewildered Owen (Kevin McKidd) seeks guidance when he babysits Harriet; and Amelia’s (Caterina Scorsone) not sure how to share some important news with Owen.

Did you watch the Grey’s Anatomy season 13 episode 4 where Alex tried to do the right thing but still couldn’t catch a break. Jackson and April adjusted to their “new normal” with the baby?  If you missed it, we have a full and detailed recap right here for you.

On tonight’s Grey’s Anatomy episode as per the ABC synopsis, “Meredith and Bailey are at odds when both of their patients need a liver transplant, Owen seeks help from the other doctors when he is charged with babysitting baby Harriet for the day, and Amelia struggles with telling Owen some important news.”

Amelia was late as in the other kind of late that usually means only one thing. However, she hadn’t known that she was late until she saw April back at work. April was supposed to return on the 29th and so Amelia had at first been confused when she saw April because she thought that it was 26th, but April knew the truth and so she just showed Amelia a calendar. So Amelia had tried to get a pregnancy test immediately after talking to April. And she would have gotten one without anyone being the wiser if Meredith hadn’t accidentally caught her rummaging through the supply closet.

Amelia hadn’t exactly counted on anyone walking in on her while she tried to find a pregnancy test on her own and simply couldn’t. But Meredith had unfortunately thought that Amelia was looking for drugs so she right and asked Amelia about it. So Amelia finally had to tell someone what she found out. She told Meredith that she was pregnant and Meredith had hugged her because she thought it was good news yet Meredith’s support collapsed the second that she found out that Amelia hadn’t even peed on a stick before announcing she was pregnant. And so she showed Amelia were the pregnancy tests were in order to make the pregnancy real.

Yet, Amelia had been scared to take the test. She hadn’t been sure if she should tell Owen her news before or after she peed on the stick though she had pretty much found a way out of saying anything at all to Owen because he had been busy. Owen had apparently agreed to watch April and Jackson’s baby in order for Jackson to have a break so Amelia technically considered to be busy with another baby. So Amelia tried asking people for their advice. She had gone to Maggie and she had gone to April. And while Maggie had been too polite to say anything, April’s advice had been to tell Owen before someone else accidentally spilled the beans.

So Amelia then tried her luck with Meredith again. She had wanted to tell Owen the news in the perfect way and so Meredith was asked how she told Derrek. But Meredith hadn’t been that big on sentiment. She said she told Derrek with a t-shirt and she mentioned that she didn’t have to tell him the last time because he had been dead. And that had brought the conversation down a bit however it also reminded Amelia about what happened to her. Amelia had been pregnant before and she never got the chance to tell the father that because he had died unexpectedly as well.

Owen, though, had eventually found out that he had a knack for parenting. There had been a few hits and misses with baby Harriet because it had taken her some time to settle with Owen. Yet, he eventually got there and finding out that he could get Harriet to like him had made him excited about having a family with Amelia. So that had been the perfect opening for Amelia. She and Own had recently started trying and therefore he would have been ecstatic to find out that there was a chance they had gotten pregnant that fast.

Though Amelia was wavering and Meredith was too busy fighting with Bailey to offer up any type of support. Meredith had a patient that was suffering liver failure after an accident and she had wanted the liver that had come in for Bailey’s patient. Bailey’s patient was eighty, a sweet grandma, and she had been waiting on the list for a liver for over three years, but Meredith’s patient was in much more precarious condition so a question had to be put to the sweet grandma. Grandma June could give up her liver to the twenty-five-year-old woman that could die in the next few hours and that way Meredith’s patient could live while grandma waited for the next liver on the list.

Only sweet Grandma June didn’t want to wait. In fact, she said screw the younger woman and decided that she had waited for her liver long enough. So Meredith had thought that Grandma June was being selfish and she hadn’t wanted to listen to Bailey that said a new liver could come however a new liver did come. Maggie had lost her patient in surgery and his liver was in perfect condition. He didn’t drink or smoke and more importantly, he died on the same day that Chelsea got in her accident. And so everything had fallen into place.

Chelsea’s twin sister hadn’t been able to donate part of her liver because she was pregnant, but finding out that her sister was going to get a liver so soon had made her just blurt out that she was pregnant to her husband over the phone. So hearing that gave Amelia the strength she needed to tell Owen she was late and together they waited on the pregnancy test results. However, Amelia wasn’t pregnant and both she and her husband had looked heartbroken by that.