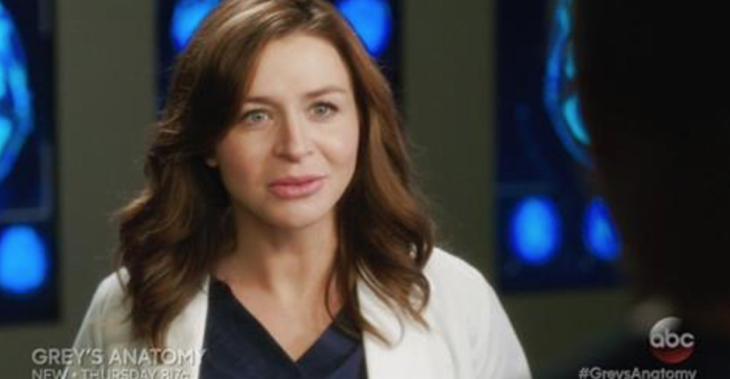 Did you watch the Grey’s Anatomy season 13 episode 5 where Meredith and Bailey were at odds when both of their patients needed a liver transplant?  If you missed it, we have a full and detailed recap right here for you.

On tonight’s Grey’s Anatomy episode as per the ABC synopsis, “A familiar face returns to Grey Sloan, throwing many of the doctors for a loop. With Catherine putting on the pressure, Bailey has to make a decision about Alex while a tough ER case makes Amelia’s bad day even worse.”

Richard found himself in some hot water when he had decided to hire back an old intern without talking it over with anyone. So the stress and frankly the panic that Arizona had personally gone through when she heard what happened was really all Richard’s fault. Richard had known who Leah Murphy was and what she had almost did to everyone at the hospital yet he brought her back anyway and so everyone had tried to deal with that. But it was hard because it was Leah. Leah was the one that had slept with more than one attendee and then had the nerve to drag the whole hospital through a sexual harassment lawsuit.

Yet, the lawsuit wasn’t even because she had truly felt threaten to sleep with anyone. Leah had sued because she slept with Arizona when Arizona was still married to Callie and had felt heartbroken that Arizona had wanted to work on her marriage afterwards. So pretty much no one had wanted to see Leah back and surprisingly her old friends at the hospital had felt the same. Stephanie and Jo had started the same time as Leah however, neither of them had talked to her in months if not years and Stephanie for one had no problem with talking about her former friend. Stephanie for instance, had actually warned DeLuca about Leah.

Stephanie had told him that Leah had been mess in her personal life as well as her professional one. So Jo had tried to speak up for Leah and say that she hadn’t been that bad though it was kind of hard to defend the fact that Leah had once cut into someone’s leg and had hit the table. However, Stephanie had kept badmouthing Leah long after Jo stopped defending her and unfortunately Leah had heard some of that. She had heard that Stephanie thought she was foolish and she hadn’t taken Stephanie to task. Instead, she had just sat down at the same table and had told the group that she had heard they were talking about her.

Leah didn’t get mad though. She had chosen to be civil because her job at the hospital was more important than any spat and more than anything she had a reason for coming back to work at Grey Sloan. Leah had come back to the hospital in order to learn from Maggie. Maggie had apparently written a paper few years ago that had convinced Leah that she still could be a surgeon and that cardiac could become her field of expertise. So Leah has been tracking Maggie’s career ever since and Maggie was basically her idol. But she had later told Maggie how much she had gotten her through some dark times and both Maggie and Riggs had reassured Leah that it will get better.

Neither Maggie nor Riggs had a great start at the hospital and it had gotten better for them so they truly believed that things will eventually get better for Leah as well. Yet, Leah managed to do one of the impossible. She had gotten on with her life and there were a few people at the hospital that were stuck in the past. Like Amelia. Amelia began acting strangely after taking the pregnancy test that was negative however she didn’t want to talk about it with anyone and she had also told Owen that maybe they could wait on having kids. So Amelia had clearly been going through something and the only person that she felt comfortable talking to was Alex.

Alex was a bit of a black sheep as well so Amelia reached out to him and told him what she was going through. Amelia had told him that she had hated taking that pregnancy test because she saw how excited Owen had gotten by the thought of a baby and she had already been down that road once before. Amelia had had a baby and her baby had died. However, no in Amelia’s family had known about the baby and Amelia had said that Owen only knew part of the story. So what was bothering Amelia was the part she wasn’t sure that she could or want another baby and she felt horrible about it because she knew that she could tell Owen that.

But she could tell Alex and so Alex ended up seeing the part of Amelia that she believes makes her a horrible person yet he didn’t judge her and didn’t even say anything just then. He knew that Amelia needed talk and he allowed her to talk. Alex had merely been her ear when she needed him and then later he told Meredith that they should have waffles for breakfast with the whole family and that they should invite Amelia to it. So Meredith had agreed to invited even if she didn’t understand and she had thought that the breakfast was something that Alex needed to get him through court. A court date had finally been set for Alex’s trial and Meredith had been trying to support him anyway she could.

Sometimes though Meredith overdoes it. She had fussed over him when he was preparing for court and she would have fussed him over at the clinic if she didn’t hate that place so much. Yet, Alex was getting to the point where he didn’t mind working in the clinic. Alex knew that he provided medical care to people that usually couldn’t afford it and had even told a woman he had met at the courtroom about it when he had noticed some of her symptoms. So eventually Alex did see that woman again and she had become his patient because it turns out that she truly needed one. Alex’s patient was pregnant and she had pancreatic cancer therefore she needed to make a choice.

His patient needed to decide if she wanted to live longer or if she wanted to live just long enough to have baby. However, Bailey didn’t like nor she did approve of Alex going behind her back and telling his patient about the experimental surgery that could see to it that she delivers her baby. Bailey had thought that Alex was overstepping and worse he was making her looking lenient. Bailey had gotten chewed out by Catherine about being professional. So she was trying to crack the whip with everyone and Alex simply refused to fall in line. Alex had told his patient about that experimental surgery and he had also demanded a surgeon even though he was on punishment at the clinic and supposed to be contrite.

But at the end of the day Bailey didn’t want to fire Alex and she had even told Catherine that. So Bailey had put the ball in Catherine’s court and Catherine had surprised her by no longer caring about Alex. Catherine had said that she looked into everyone’s files and she didn’t believe that it wasn’t Alex’s fault or any the many other doctors that had needed a second chances at the hospital fault for what they did at the hospital. She said the students couldn’t be blamed for how they had been taught and so for some reason Catherine thought that her own husband Richard could be why so many doctors keep failing.