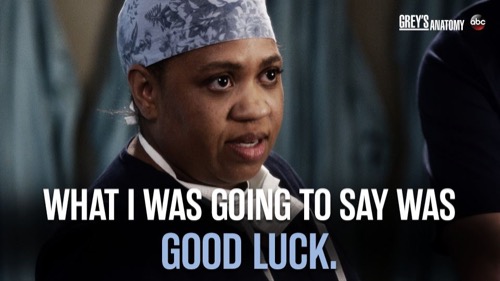 On the last episode, Richard swapped pairings among the residents and attendings, baffling everyone. Meanwhile, Arizona made a bold decision as she treated a woman who’s carrying quadruplets; and April faced a tough choice. Did you watch the last episode? If you missed it, we have a full and detailed recap right here for you.

On tonight’s episode as per the ABC synopsis, “a complex triple-organ transplant gets underway. Meanwhile, Jackson discovers that April is pregnant again; Meredith ponders reentering the dating world as a widow; and Andrew wants no favoritism after he and Maggie go public with their relationship.”

This episode looks like it is going to be a great episode and you won’t want to miss it, so be sure to tune in for our live coverage of ABC’s “Grey’s Anatomy” Season 12 Episode 15 at 9 PM EST!

The secret was out on tonight’s all new episode of “Grey’s Anatomy”. Apparently everyone at the hospital now knows that April is pregnant and that Jackson is the father. And unfortunately news has also spread about their fight because these two hadn’t exactly been quiet with the fact Arizona had told him rather than April, herself.

Although, April did swear that she was going to tell him eventually. It seems that she had been thinking about it and going over what Arizona had told her. So she had already made the decision to tell him about the baby when Arizona beat her to it, but Arizona would later say that she hadn’t meant to betray April. She had simply been speaking with Jackson and it had initially appeared as if he knew about the baby by that point so she had been dancing around the subject with him when Jackson had finally made it clear that he was talking about dating again. And how he didn’t want April to hear from anyone else because it was hurt her.

So that’s when the truth just spilled out. However, Arizona was sorry about what she had done and she had tried to apologize to April once April realized what she had done yet it had been too little too late. April after all believed in hell so she told Arizona that she truly means it when she said “go to hell”.

Yet Riggs had actually sided with Jackson. Riggs had partially overheard the fight between April and Arizona so he must have asked April about it though it soon became clear that he wasn’t going to side with his war zone friend on this one because he later told her that Jackson did have the right to know. And that he, himself, would have been just as upset if a woman had ever done that to him.

Only April and Riggs’s conversation about what happened wasn’t resolved by time they had gone into the OR. So she was fending off innuendo when it suddenly seemed like a mercy that Riggs had stopped baiting her and began to argue again with Owen openly in front of everyone. Though their recent argument was seemingly about their patient, Tess. The two men had been talking about Tess who happens to be a bit of a daredevil that likes to go rock climbing with her boyfriend and they both had different ideas about who was at fault with her accident.

The patient’s parents had blamed her boyfriend for continuing to take her out on their exciting jaunts yet Riggs felt like that it had been the patient’s decision to do that. Not anyone else’s. So while the guys had pretended that their argument was about the patient, it did bear certain similarities with what happened to Owen’s sister and Riggs’s wife.

And despite everything they tried, Tess was still pronounced brain dead on the table. So their argument hadn’t gotten them anywhere and April ended up running into Jackson the second she got out of the OR. Although he hadn’t been in the talking mood by that point. He had just been angry with her that he told April that if she wants to do it alone then she could because he was “out”.

So the conversation that April had been envisioning with Jackson did not end well. And eventually Owen had to go comfort her in one of the break rooms because she hadn’t wanted to show her face in front of anyone.

But Arizona was sorry. She had tried to talk to Callie about what she had done yet Callie ended up siding with April seeing as it hadn’t been Arizona’s place to tell Jackson anything much less what April had told her in confidence. So Arizona had then tried to get Bailey’s advice only Bailey didn’t have anything to tell her. Bailey had actually been one of the people that had witness the fight between Jackson and April so she knew that Arizona had been in wrong and told her it didn’t matter what her reasons were. What she did was wrong.

Elsewhere in the hospital, though, Meredith and Alex later had a heart to heart. Alex had apparently teased Meredith all day about the date she had finally made with the army doctor and he had placed bets that Meredith was going to cancel the date before it could even take place. Yet Alex eventually stopped with the nonsense when he saw how much Meredith needed to allow someone new in and so he had talked her into going.

And yet Maggie had tried to do something to no avail. Maggie had talked about how hot this army doctor was and how he seemed to be really interested in Meredith. So she had offered to cover Meredith with their patient Kelsey who needed a triple organ transplant and she had done so because she wanted Meredith take the same chance as she did with DeLuca. However, Maggie’s relationship with DeLuca wasn’t doing so well.

It seems his fellow interns had gotten to him about dating the Head of Cardiothoracic Surgery and how that must result in him suddenly being favored. So while DeLuca hadn’t asked for space, he had let Maggie know that he was in an unfortunate position because of their relationship and then told her that he wanted to stay behind at instead of going over to her place. And his excuse had been supposedly to study.

Though Meredith had gone on her semi-date with Major Thorpe and the two had honestly enjoyed themselves so Meredith hadn’t regretted taking a chance on him. Not like how Amelia regretted seeing Owen that same night. Owen and Riggs had talked about his sister at the end of their shifts and the conversation resulted in Owen drinking the moment he got home. To the extent that he was just plain drunk when Amelia came over. So Amelia left him to stew while she made the best decision for herself and her recovery.

And Jackson did go by April’s later. He said he had thought about it and that their child didn’t deserve to have parents fighting over it, but then he asked April why she even wanted to put them through all of this when she could have made a different decision. That he knew went against her faith.

So it was one step forward and two steps back!