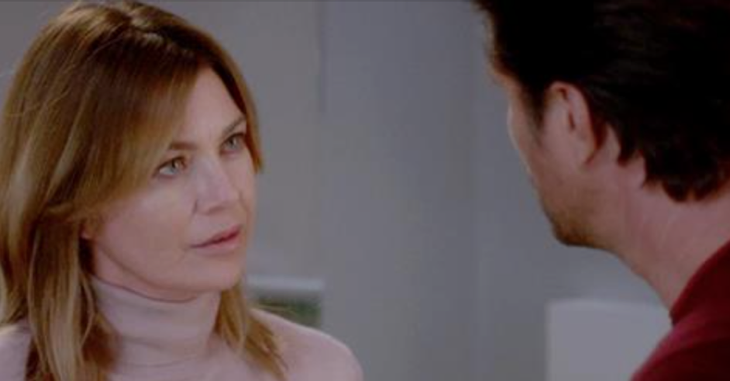 Tonight on ABC their hit drama Grey’s Anatomy returns with all-new Thursday, September 29, 2016, season 13 episode 2 and we have your Grey’s Anatomy recap below. On tonight’s episode, in the Season 13 episode 2,  Amelia (Caterina Scorsone) and Owen (Kevin McKidd) have a dinner party with surprising guests; and Jackson (Jesse Williams) has an idea for how to assist April (Sarah Drew) as she recovers.

Did you watch the Grey’s Anatomy season 13 premiere where one of Grey Sloan’s own landed in the hospital, Bailey tried to figure out what happened while the rest of the doctors jumped in to help?  If you missed it, we have a full and detailed recap right here for you.

On tonight’s Grey’s Anatomy episode as per the ABC synopsis, “Meredith (Ellen Pompeo) considers her loyalties, as Alex (Justin Chambers) deals with the repercussions of his actions. Newlyweds Amelia (Caterina Scorsone) and Owen (Kevin McKidd) host a dinner party with unlikely guests, and Jackson (Jesse Williams) proposes an arrangement to help April through her recovery.

This thing between Alex and DeLuca was tearing the hospital apart on tonight’s episode of “Grey’s Anatomy” and so Bailey knew that she needed to do something fast before there was another scene at the hospital. However, asking her husband Ben who was also an intern (which was the same as DeLuca) to spy for her didn’t necessarily fly with said husband. Ben had told her that he was just getting his reputation back at the hospital and he didn’t want to risk that by spying on everyone for Bailey. So Ben said no, but Richard who had overheard the conversation had offered up his own services.

Richard had said that he could return the favor for when Bailey used to spy for him when he was the chief. But Bailey had a hard time believing that because she knew that the interns and attendees tended to shut up whenever Richard was around. So Bailey had tried to turn down Richard yet he swore that he could do the job and even said that he had way around people shutting up. Richard had said that he could get the dirt on the others if he wasn’t seen so he instantly began to disappearing and reappearing from the room before Bailey could even notice. And that had been impressive for the older man.

Yet, Richard didn’t even need to bother with any sleuthing because the gossip at the hospital eventually grew out of control after Alex was arraigned. Alex had gotten a lawyer and he had been prepared to plead guilty to the misdemeanor though he hadn’t been prepared for the ADA to up the charges to a felony. A felony meant prison time and so Alex had been forced to plead not guilty because of it. Not Guilty allowed Alex to continue being a doctor at the hospital. So it truly had been the only choice that he could make at court and if that meant ticking off DeLuca then so be it because DeLuca was clearly a man with a grudge.

DeLuca had been in court as well and he had obviously talked about the charges with the ADA beforehand because the other man had extensively known how bad his injuries were. So the fact that the prosecution used medical terms to describe how DeLuca’s career was nearly destroyed because of the beating showed that DeLuca was still angry because of what happened. But Meredith had this idea that she could talk to DeLuca and get him to calm down so she tried to doing so however it had been odd when she told him that she had forgiven the man that had attacked her. And unfortunately DeLuca had then accused Meredith of threatening him.

DeLuca thought that all her talk about forgiveness and that he shouldn’t be giving up valuable time in the OR to spend them in court was a threat. Though Meredith genuinely hadn’t meant it that way and so she had been forced to warn Alex of what she did. Alex had had enough on his plate with DeLuca gunning for him already what with the trial so he felt intimidation or better yet an intimidation charge would be the end of him. So Alex had gotten himself worked up after that and he had ignored a serious concern with one of his patients that had come in with a stomach complaint.

But Ben had tried to warn him. Ben had been the intern that was attached to Alex’s service all day and Ben had noticed that their patient’s temperature was rising dangerously high. So Ben had tried to talk about the kid’s temperature with Alex and Alex had nearly been his head off for it. Alex had still been raw by then and he hadn’t wanted to even glance at the chart that Ben had also tried to show him so what happened next had been on him. His patient had had their appendix rupture on him and unfortunately he had been left skeptic by that. And that could affect the patient’s recent kidney transplant.

Alex though hadn’t run away from what he did. He had tried to come back to the hospital after he had been paged and that meant he had left Own and Amelia’s return party. However, Alex had rushed to the hospital and he had been willing to scrub in when Bailey told him not to bother. Bailey had been upset that Alex had missed his patient’s symptoms and so she removed Alex from his longtime patient’s case. So Alex could have downplayed what he did and instead he chose to go find the patient’s mother. And be honest with her.

Alex told her that he had missed the signs and that he hadn’t kept his promise. He had promised to look in on the little boy every hour and instead he had merely checked the kids’ lab results. So the mother had yelled at him and she had asked him to just go away. Yet, Alex’s mistake could very well be a costly one and that was something that Bailey didn’t want Meredith to overlook this time. Bailey had heard about what happened between DeLuca and Meredith so she talked to Meredith about her unending loyalty to Alex. She told the other woman that at some point she had to leave Alex to fend for himself.

Meredith however couldn’t really do that. Meredith said that she was Alex’s only family and so she knew that leaving him alone would be the end of him. But Meredith did talk about the case with Alex and later she had been the one that Bailey asked to perform surgery on Zach. So Alex had been allowed to talk to Zach before the surgery and he did what the little boy requested of him. He had gone out afterwards to keep Zach’s mother company during the surgery. Meanwhile Meredith had asked DeLuca to scrub in on the surgery so that he could still learn while he’s healing.

Though the one person that had the most to contend with was Jo. Jo had been hurt by Alex when he called her trash when she had tried to explain what really happened with DeLuca earlier yet Alex had tried to apologize for that and she had turned him. Jo had said that hurting her come too easily for him and she honestly didn’t think that they had a relationship to salvage. So it didn’t matter what Alex wanted because ultimately it was his mistake that night that could ruin everything. From his career, to Jo, and possibly land him in prison. And so Bailey later talked to him about what happened.

Bailey had told Alex that she thought he had left his old self behind long ago and so she had been disappointed by his many his mistakes. She hadn’t expected that it would be him that did all of that to DeLuca and that had come as a rude awakening. Yet, Baily couldn’t walk away from Alex and, like Meredith, she wanted to give him another chance. So Bailey placed Alex in charge of the clinic at the hospital and that way his mistakes wouldn’t amount to such a crisis as the one that Zach had. And so Alex was still hanging on.

Meredith though had found herself in a little bit of trouble. Meredith had talked to Alex about Riggs so the two had been discussing why she couldn’t date Riggs when Maggie came in. Maggie had just asked Riggs out and so she had needed to get over the fact that he had turn her down. So Alex didn’t need Meredith to explained why any relationship between her and Riggs was complicated. He kind of saw why with Maggie. But while that relationship triangle had been bad, April and Jackson managed to be the balm that could cure anything.

April and Jackson were working out how they were going to take care of little baby Harriet when Jackson asked April to move in with him for a while. However, she initially said no because she wanted clear lines between them. So who knows what might happen when April does wish to lean on her ex and they remember all of their feelings for each other.