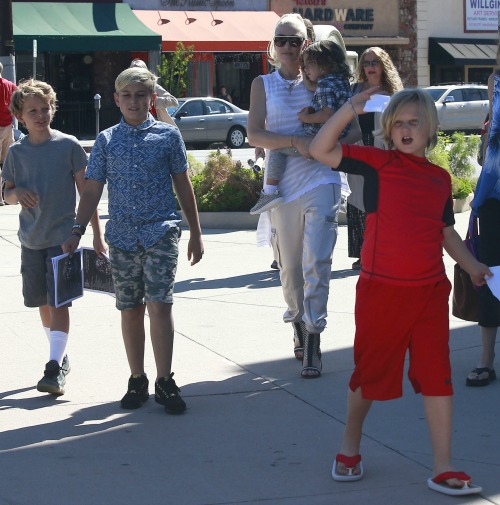 Gwen Stefani is dodging questions about her future with Blake Shelton, fueling rumors that her ‘showmance’ with the country music star might be coming to an end. In fact, the chart topper looked both squirmish and uncomfortable when she was pressed to talk about her future with Blake during a recent interview, leading many to believe that the couple are close to calling it quits.

According to Entertainment Tonight, Gwen Stefani dodged wedding questions when talk show host Ellen DeGeneres tried to squeeze the details out of her during a recent interview. When Ellen pressed with, “Before I make plans, because I make plans way ahead of time, tell me when you’re getting married,” Gwen responded with, “You’re crazy. OK, I’ll let you know,” rather sarcastically.

Considering just how open Gwen Stefani and Blake Shelton have been about their PDA-heavy relationship, both fans and critics alike can’t help but wonder if Gwen is refusing to admit that there will be no marriage happening after all. It’s no secret that Gwen and Blake have been using their romance to help promote not only ‘The Voice,’ but their careers as well, with their duet, “Go Ahead And Break My Heart,” along with their album and tour promotions.

Unfortunately, Gwen and Blake didn’t get the response they were hoping for as Gwen’s tour has been considered a disaster so far with poor ticket sales while Blake’s studio offering, ‘If I’m Honest,’ hasn’t been selling the way he initially wanted. Blake Shelton and Gwen Stefani’s over-publicized and over-hyped showmance has not only hurt their music careers, but their images as well, as fans have had enough of their constant media love proclamations and Instagram selfies.

And then of course, there’s also the fact that Blake and Gwen have been isolating their own co-stars on ‘The Voice’ by using their romance to attract as much on-camera attention as possible. Adam Levine and the rest of the cast have had enough of Gwen and Blake’s constant need to show off in front of others, leading many to believe that it will only be matter of time before their showmance blows up in front of their very own eyes.

If Gwen Stefani is already dodging marriage questions, then surely it means that the end is near for her and Blake’s relationship. What do you think, CDL readers? Are Gwen Stefani and Blake Shelton going to break up before the end of the year? Let us know what you think and come back to CDL for all The Voice news, recaps and spoilers!

@KuuKuuHarajuku video is out now!  Link in Bio for full video. Going #KuuKuu on Oct. 3rd for my @NickelodeonTV new show!!! Gx

@theellenshow I love her #radperson Gx