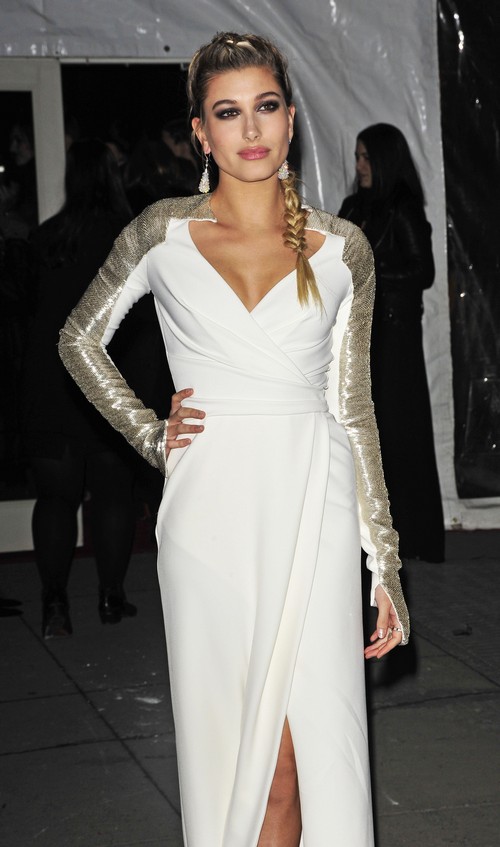 Hailey Baldwin and Justin Bieber are spending Valentine’s Day together, sorry Selena Gomez! Hailey Baldwin and Biebs have played coy about their relationship for over a year – but it is obvious the duo is dating. Hailey seems to have finally accepted the fact that if she wants to be with Justin, she is going to have to share him with a handful of other celebs, but Baldwin seems totally okay with it.

Entertainment Tonight caught up with Hailey Baldwin at a recent red carpet event – and she gushed about how much she loved Justin Bieber and hinted that they would be spending Valentine’s Day together.

Recent reports indicated that Selena Gomez (who is now single) was hoping to have a romantic reunion with Justin on Valentine’s Day – but it looks like that won’t be happening. In Justin’s defense, we’re not exactly surprised he chose Hailey over SelGo, she’s pretty low maintenance and a cheap date. All she wants is food!

On the red carpet Hailey praised her rumored boyfriend and gushed, “He’s really funny and we have a good time together. He’s just really sweet, he’s a good kid and has a good heart. And, yeah, I love him.” When the ET reporter asked Hailey what her and Justin’s Valentine’s Day plans were, Baldwin laughed, “I just want food!”

It sounds like Hailey Baldwin and Justin Bieber are definitely dating – although we’re a little baffled about his recent hook-up with Jessica Serfaty. Maybe they have an open relationship? Or maybe Hailey Baldwin is just completely clueless. Either way, ignorance is bliss, and she and Biebs seem super happy. After this recent public love fest, Selena Gomez might go over the deep end.

Do you guys think Hailey Baldwin and Justin Bieber make a cute couple? Or is Hailey just kidding herself about her relationship? Let us know what you think in the comments below!