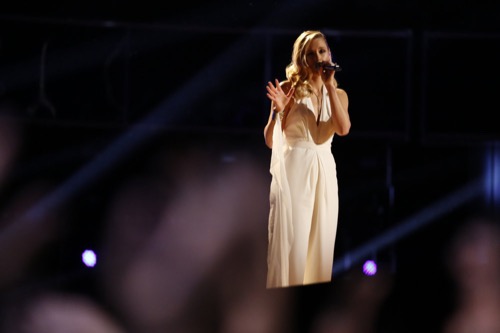 Hannah Huston of Team Pharrell chose to perform live “When a Man Loves a Woman” by Percy Sledge this week for her Top 8 song performance. Did you watch tonight’s show? In case you missed tonight’s show, CDL has you covered – read our full and detailed recap right here! And if you missed any of the videos – check those out right here.

On tonight’s Top 8 episode, Hannah sang “When a Man Loves a Woman” by Percy Sledge as her live performance and this is the judges’ comments about her performance:

“Next up is Hannah Huston who is doing the Percy Sledge classic When a Man Loves a Woman. Pink and Pharrell encourage her to dig deep. Hannah says music is freeing. She takes the stage and does a wonderful rendition of the song.

The crowd loves it and Adam is first with the comments. He says she’s one of the most consistent people they’ve ever had and says a week before the finale and she’s really killing it. Blake says he agrees with Adam and says she’s not had anything like that.

Blake says it’s a perfect time to pull out a card like that. Coach Pharrell says it’s been a slow build and says she knew she had something and now she knows she deserves to be there and is singing and doing her best. He stands and the crowd cheers.”

Check out the full video below – and share your comments on Hannah Huston’s Top 8 performance. Do you think Hannah can win it all? If you missed any of the Top 8 performances – you can see them all right HERE! Share your thoughts in the comments below on tonight’s finale performances for The Voice Season 10 Top 8.