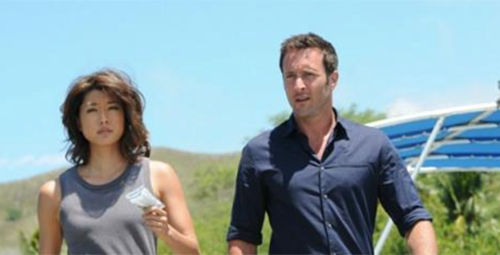 Tonight on CBS Hawaii Five-0 continues with an all new Friday April 15, season 6 episode 20 called, “Ka Haunaele.” and we have your weekly recap below. On tonight’s episode, Five-0 investigates the theft of a high-tech, indestructible suit created for the U.S. military.

On the last episode, a case from 15 years ago forced Grover to take his family on the run when a dangerous mob boss tracked him down to seek revenge. Did you watch the last episode? We did and recapped it right here for you.

On tonight’s episode as per the CBS synopsis, “Five-0 investigated the theft of a high-tech, indestructible suit created for the U.S. military. Meanwhile, Jerry tried to help his sister save a captive elephant.”

An elephant managed to escape its handlers on tonight’s all new episode of “Hawaii 5-0” and unfortunately it had escaped out onto the main road.

So for a while there, there was just an elephant out on the loose and terrifying all the pedestrians. But an elephant on the loose stops becoming a laughing matter after HPD looked at security footage and realized that someone had intentionally freed the elephant. Who luckily didn’t hurt anyone. And so while the person that freed the elephant might have had good intentions, the police department as well as 5-0 had to personally look into it.

And what 5-0 eventually found out was that someone took advantage of the chaos. Apparently an export business that was little too much into the whole cloak and dagger thing had been wirelessly hacked and whoever the culprits were had then been smart enough to disable the security system in order to break in. Right before they stole an eighty-million-dollar suit.

Now that suit was something special. It had been a military grade action suit that would allow its wearer to survive gunshots, explosions, and would also enhance the physicality of its wearer. So the suit basically had zero vulnerabilities and it turned whoever was inside into Ironman. Yet, 5-0 had been told there was no way they could stop someone if they were wearing it.

However, they did have to investigate into who would possibly know enough to steal it and why the suit had been taken in the first place. The suit could be sold because he was worth a lot, but the suit could also be used. Such as in a bank robbery or by a terrorist. So 5-0 had to go through a list of twenty people and in the meantime Danny’s nephew Eric was looking into the elephant thing.

And as 5-0 was getting nowhere, Eric had some pretty devastating news for Jerry. Jerry had gotten pretty excited what with his theory about top secret government being right and his baby sister Isabel in town. But it turns out Isabel had been the one to release the elephant and Jerry knew, that no matter what her reasoning was, what she did would mean she’d never be able to become a lawyer.

So Eric had done him a favor. Eric “accidentally” deleted the incriminating picture of Isabel so that Jerry could have some time to talk things over with her. Though the police station soon had a problem on its hand. And not just because Eric delayed finding results.

It seems someone wearing the suit had decided to target HPD and so SWAT with pretty much anyone else they could get their hands on had showed up for a standoff with a real life Ironman.

Jerry though figured something out about his sister. He thought his sister had made one stupid mistake when the truth was she has been doing this for a while now. Isabel had apparently joined up with an activist group called Animals Without Chains. And her group was focused on returning abused animals back to the wild.

So Isabel actually didn’t care about what happened to her. She cared about the elephant she had named Mazie and that’s why she asked her brother Jerry for help. Isabel had managed to find the elephant again and she said she needed a new transportation vehicle to get Mazie to the boat that would then take her to a sanctuary.

And that meant Jerry had to make a decision. He had to figure out whether or not he was willing to break the law for his sister. Who quite honestly hadn’t factored him in until she needed his help to commit a crime.

But Ironman got away. He had broken into the police department to ransack the evidence room however 5-0 had no idea what he had taken. He had knocked out the security cameras after going in there and had created so much of a mess in his wake that the authorities thought it would take days if not weeks to figure out what was stolen.

Only they found out pretty quickly that a berretta had been stolen. The firearm had been the only evidence in a case against Luke Waiola. A man that Hawaii PD has been after for years now. So 5-0 looked into Waiola’s accounts and they found his lawyer had wired ten million dollars into a new account that only she had access to. And that transaction happened on the same day as the break-in.

So McGarrett had been downright clear with Waiola’s lawyer. He told her that she could go to prison as well or she could help them catch the guy she was about to pay off. And thankfully she agreed to the latter. The lawyer had told 5-0 the time and place of the money drop off and they had showed up to catch their Ironman.

Yet, they had needed to be creative so they had rammed their culprit with a car and removed his helmet before he could fully come to. So that’s how they found they knew their culprit. He had been one of the people they questioned early on, but they had dismissed supposedly because of an airtight alibi.

And so Jerry had figured out how Foster was able to be in two places at the same time. It seems Foster had hacked the movie theatre’s security feed to fake the time stamp. So Jerry had caught onto it by noticing the movie times had been for a week earlier than the video said, but his good deed wasn’t going to get him a badge anytime soon.
McGarrett had found out about his sister and that Jerry had helped cover it up. So he was willing to overlook yet not exactly forget. Though while this was going on, Kono was busy looking into Adam because she wanted to know what he and Gabriel Waincroft had talked about when Gabriel visited him in prison. And all the guards looked the other way.