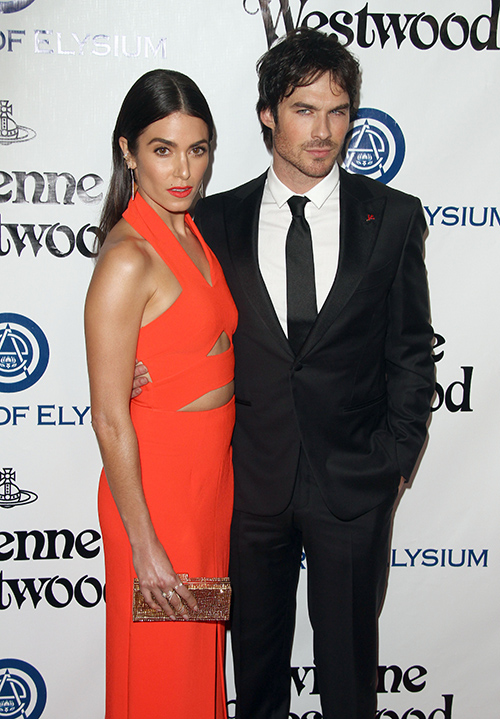 Nikki Reed is on her second marriage after her failed one to American Idol alum Paul McDonald. She jumped right into a marriage with The Vampire Diaries star Ian Somerhalder, who had a very “hot” and extended relationship with his co-star Nina Dobrev, both on and off the screen.

Was Sleepy Hollow star Nikki Reed really ready to take on that kind of baggage? Time will tell, as she is seemingly committed to the marriage and starting a family while Ian Somerhalder can’t forget Nina Dobrev.

Could this be an even shorter marriage for Nikki? She was recently seen at LAX taking a German Shepherd puppy to its forever home, according to the Daily Mail. Sure, she loves animals, but is she devoting her time and love to animals because Ian Somerhalder is hung up on Nina Dobrev?

If Nikki Reed doesn’t surface with a baby bump soon, could this be the beginning of the end of the marriage? Do you think that Ian Somerhalder is too career driven for a commitment to having babies? Or is he just stuck in the land of Nina Dobrev? Will Nikki Reed put her foot down or will she just bury herself in her career while she pretends that her husband isn’t hung up on his ex, Nina Dobrev?

And speaking of Nina Dobrev, where is she in all of this? Does she even have a clue what’s going on with Ian Somerhalder and his wife? It looks like she’s keeping herself very busy with three different films that will be released this year and one in 2017.

If Ian Somerhalder leaves his wife, Nikki Reed, do you think that Nina Dobrev would be ready to pick up where they left off? Drop your opinions in the comments below, then check back here at CDL for all the latest celebrity gossip!