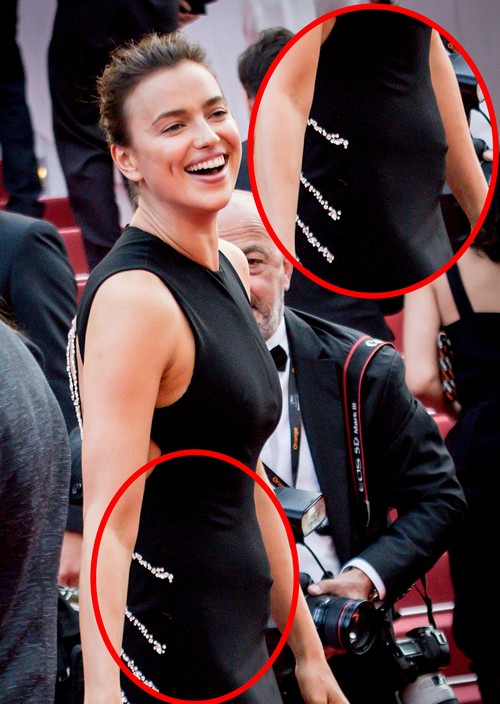 Is Irina Shayk pregnant with Bradley Cooper’s baby? The model arrived at the Cannes Film Festival in France on May 18 and walked the red carpet in a gorgeous black gown – and Shayk had what appeared to be a baby bump. Irina Shayk and Bradley Cooper began dating in April 2015, and it looks like the couple may be taking the next step – and adding a new addition to their family.

Irina Shayk and Bradley Cooper have grown very serious over the course of the last few months. Just last week Bradley and Irina were spotted revving up the PDA at a Beyonce concert, and Bradley even brought along Irina’s mother Olga and made it a family affair. The fact that he and Irina’s mother are so close is a good sign that the couple is solid – and could be planning to start a family together.

Contrary to popular belief, this will be baby number one for Irina Shayk. The actress dated Cristiano Ronaldo (an infamous Portugese football player) for over 5 years. While Cristiano does have a son, and Irina was a part of his life, the baby boy was not actually Irina’s. Rumor has it that Cristiano hired a surrogate to carry the child, he was born in America, and Cristiano has full custody – but never revealed who the child’s mother is.

If Irina Shayk’s burgeoning baby bump is the real deal, this will also be Bradley Cooper’s first child. It’s no secret that Bradley has wanted a baby. Multiple tabloids reported that the reason his relationship with Suki Waterhouse went sour was because the actor wanted to start a family, and the much younger Suki was not interested in settling down and playing house just yet.

So, check out the photos of Irina Shayk and let us know what you think. Is she pregnant, does that look like a baby bump? Share your thoughts in the comments below!

Is Irina Shayk pregnant? Irina showed off her body in a form fitting black dress while walking the red carpet during the Cannes Film Festival on May 18, 2016 in Cannes, France. Was Irina showing signs of a baby bump? FameFlynet