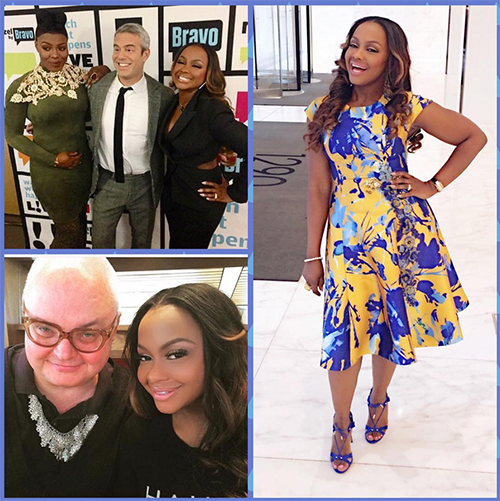 Is Kenya Moore finally pregnant? Phaedra Parks dished all in an interview on Friday, February 12. The Real Housewives of Atlanta star Phaedra Parks was very willing to volunteer the information while speaking on Dish Nation. She was quick to add that while she had no proof of the pregnancy, she was told about it from a very reliable source.

So is this really true? Or is this just more of the drama that is often on display between Phaedra and Kenya Moore? During the interview, Phaedra was smart enough not to commit to the claim that Kenya was pregnant. Instead, she continued to throw jibes, such as, “Only Jesus knows who that baby daddy is, IF, it is true”.

At the same time, we all have to wonder if there is some truth to the comments, as Phaedra makes no pretenses about Kenya Moore being her friend. So she might get some perverse joy out of breaking the news before Kenya was ready to share.

In that same interview on Dish Nation, Phaedra was asked about the seriousness of Kenya and Matt Jordan’s relationship. She was quick to state, “Well honey I don’t know. I don’t see Kenya like that, so it’s not like Kenya and I are BFFs or even FFs or Fs at all. So I don’t know what the relationship is. I’m happy that she’s a little happier’.”

On the Sunday, January 24 airing of the RHOA, Kenya finally admitted that she was in a relationship with the striking personal trainer, Matt Jordan. The chemistry between the two was undeniable as Kenya was openly flirting. While Matt helped Kenya on the site of her home, she admitted with wide smiles that the house would shelter her family; that is, children and a husband. Was this a premonition? Did Kenya anticipate getting pregnant in the near future while she was so enthusiastic about the whole discussion?

Nevertheless, there remains quite a bit to question after Phaedra’s comments. A February 14 Star Pulse report revealed that Moore planned on undergoing in-vitro fertilization (IVF) procedures. This would begin after this season’s filming of Real Housewives of Atlanta when the actress’ schedule would be less hectic. Were Kenya’s plans for IVF a sign she was getting desperate?