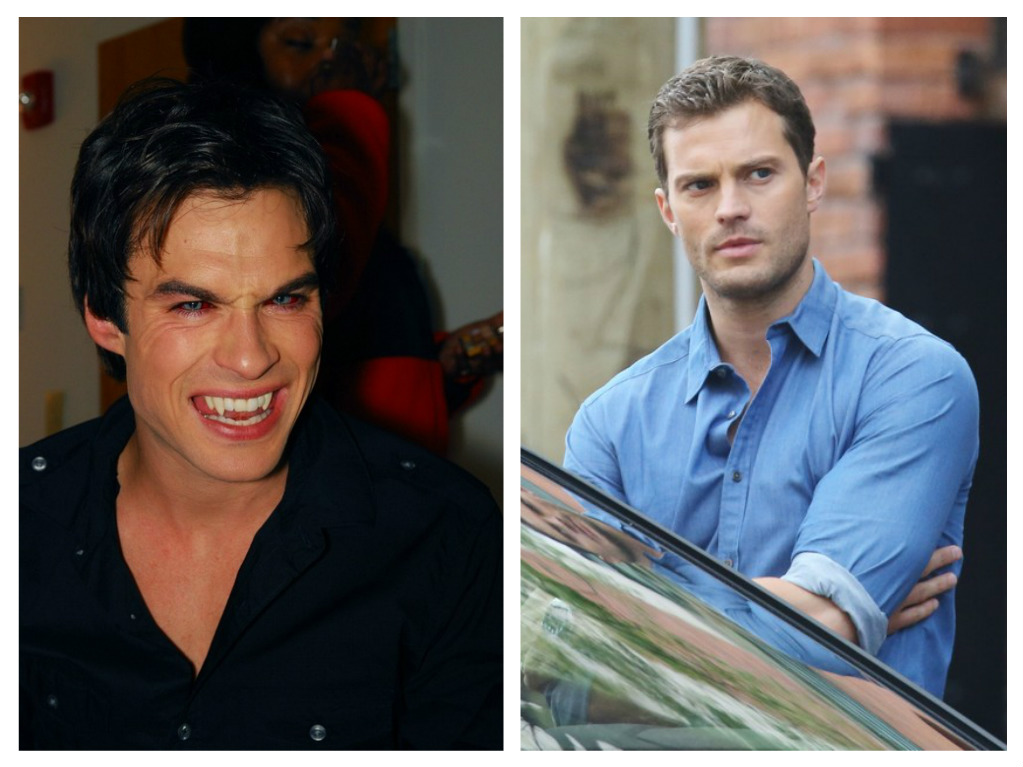 Does Jamie Dornan wants to leave his embarrassing Christian Grey role to Ian Somerhalder. In fact, the upcoming ‘Fifty Shades Darker’ star even hinted that he’s willing to give Ian the role, even though it’s helped make him a household name.

In a new interview with Jimmy Kimmel, Jamie Dornan made it no secret that he’s ready to move on to bigger and better things. That’s why when Jimmy asked, “Supposedly, I heard that Ian Somerhalder is replacing you,” he responded with, “That would be really hard for them to do, considering we shot both of the movies. That’s an expensive mistake, I’ll put it that way. But good luck to him—he’ll be great!”

Needless to say, Ian Somerhalder would not pass up on the opportunity to play Christian Grey, especially now that ‘The Vampire Diaries’ is officially ending. In Fact Ian campaigned hard for the role of Christian Grey and was rejected.

With no other job prospects in site, it could be the only way Ian will be able to continue acting in Hollywood whereas Jamie wants to break free from the franchise, especially since there might be another film, ‘Grey: Fifty Shades of Grey as Told By Christian Grey,’ in the works.

It’s without a doubt that Jamie Dornan wants to pass the torch to someone else like Ian Somerhalder. He’s been wanting to break free from the embarrassing ‘Fifty Shades’ stigma ever since the first film debuted to lukewarm reviews. If that weren’t enough, Jamie has been mocked mercilessly not just for playing a sex addict on the big screen, but for his less than stellar accent and awkward acting in the film, too.

Plus, it’s more than apparent that Jamie Dornan is using the ‘Fifty Shades of Grey’ franchise to help make him a household name and nothing else. Whereas an actor like Ian Somerhalder needs a project to help him make the transfer from television work to movies, Jamie has bigger and better ambitions: he wants to be a Hollywood A-list star.

Jamie wants Golden Globe and Oscar recognition, and not to be remembered as an actor whose fan base is made up of middle-aged stay at home mothers that have fantasies about him. And playing Christian Grey is just a small step in helping him achieve his ultimate goal and that’s why he’s willing to move on now before it’s too late.

Tell us, do you think Ian Somerhalder would make a better Christian Grey than Jamie Dornan? Let us know your thoughts in our comments section below. Also, check back with CDL for all the latest news on Jamie Dornan and Ian Somberhalder.

Blue is the warmest colour💙 #jamiedornan

Hey everyone- I know you’re all super busy. The schools damaged by the Louisiana floods will need our help for a long time. Join me and @iamNikkiReed in supporting those affected by the #LAFlood and you can win a video chat with us…if that sounds fun;) please and thank you!!!!!! https://www.crowdrise.com/ian-for-louisiana