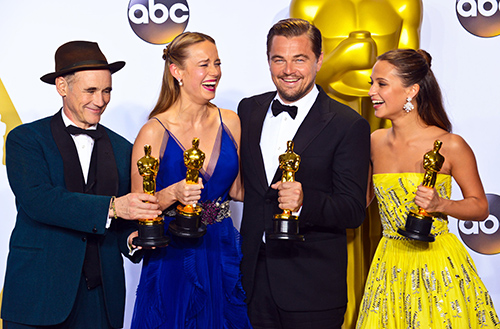 Jamie Foxx says Leonardo DiCaprio is black, declares Oscar winner honorary brother, and that he’s “one of us.” While heading to his flight out of LAX Airport, Jamie spoke with TMZ and was quick to congratulate Leonard DiCaprio on finally winning an Oscar at the 88th Academy Awards held Sunday, February 28. Chris Rock was also commended for his role as Oscar host, adding to some of the diversity the show was popularly thought of as lacking.

Jamie Foxx jokingly compared Leonard DiCaprio’s struggle for the award to those experienced by black actors based on the roles he landed in the past. Foxx was met with riotous laughter when he said Leonardo is an honorary brother. He followed that by saying, “you know black guys don’t swim.”

Foxx’s comments come on the heels of the #OscarsSoWhite controversy, which arose because no actors of color received Oscar nominations. So it is ironic that among all the calls for diversity in the show, Jamie Foxx would try to put this light spin on the entire situation. Even going as far as to classify DiCaprio as an “honorary brother” and that he represented the black community at the event.

Despite the controversy, several black actors made appearances throughout the show. As host, Chris Rock made no attempt to soften the criticisms the show had been receiving in recent months, saying within minutes of the shows start, “Well, I’m here at the Academy Awards, otherwise known as the White People’s Choice Awards.”

Jamie Foxx was just happy to welcome Leonardo DiCaprio to the Oscar winners club – which he himself became a proud member of in 2004 after winning Best Performance by an Actor for the leading role in Ray.

For years the Academy Awards had snubbed Leo and many watched with baited breaths to see if he would finally claim the coveted award. Winning the Oscar for Best performance by an Actor for his leading role in The Revenant was DiCaprio’s sixth time being nominated for the prestigious prize.

Speculation that DiCaprio would finally fall into Oscar luck grew in the days leading up to the show. According to The Guardian, DiCaprio actually had raw bison liver and even slept in animal carcasses in an effort to submerse himself in the role. That sort of dedication and commitment is surely Oscar worthy.