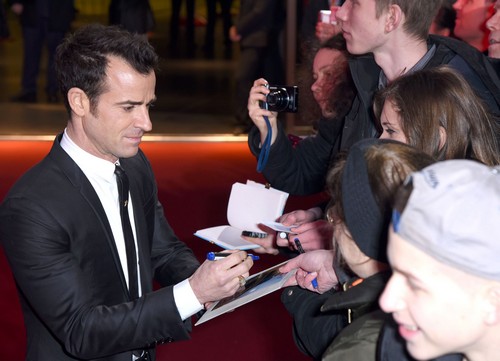 Jennifer Aniston and her husband of less than a year, Justin Theroux are at a breaking point in the marriage and heading for divorce according to a report from In Touch. Jen is allegedly so insecure with their relationship that she’s starting to look desperate and controlling.

A source revealed to the magazine that Jen’s time at the Critics’ Choice Awards was all about keeping her eye on Justin, “She was acting unnecessarily possessive of him all night. It was like she was treating him more like her sone that her husband. He was so embarrassed by her behavior that they argued under their breath at the table. By the end of the night, they were barely on speaking terms.”

Yikes. To make matters worse. Justin Theroux was not about sticking around and working out their issues. A source told the magazine, “Instead of working through their issues, Justin hopped on a plane back to New York City.” Sure he had to get back to work But if they had things to talk out, perhaps he should have stayed for an extra day?

They added that, “The only time they get along is when their apart. Sometimes Jen feels like the marriage is already over.” That is really sad. If you can’t be together and get along, then yeah. That’s not a good marriage in the least. Could this really be the beginning of the end for Justin Theroux and Jennifer Aniston.

Will she be single and sad all over again? I thought that the divorce from Brad Pitt was the worst thing that would happen to her heart. But if this doesn’t smooth over with Justin, it could really put Jen in a bad mental state. Brad Pitt is still married and that fact alone could haunt Jen if she’s ends up alone again.

Justin seems to be unfazed by the lack of his wife in his life. He’s enjoying his freedom, traveling the globe, promoting his latest film, Zoolander 2. It’s all about guy time as he hangs out with his co-stars, Ben Stiller, Owen Wilson, and of course Will Ferrell. What gives though? Why wouldn’t he want his gorgeous bride by his side, at least in a supporting fashion as he makes all of the stops on the press tour?

Jen’s birthday is coming up on February 11 and the source says, “Jen’s hoping that Justin comes around and makes amends by throwing a romantic 47th birthday party for her. The relationship is going to disintegrate if he concentrates on promoting the movie and doesn’t step up as a loving, dedicated husband.”

Well, the bad news is that Zoolander 2 hits theaters the day after Jen’s birthday. So the odds of Justin pulling through for her are not looking too good if his current actions are any indication.

I for one am really looking forward to seeing the movie. But on a more serious level, I would love to see Jennifer Aniston happy in her marriage. What do you guys think? Will Jennifer and Justin be able to work this mess out?

Or will we be hearing those famous ‘irreconcilable differences’ in the near future? Sound off in the comments below and be sure to check back at CDL for all the latest news on your favorite celebrities!

Justin Theroux signing autographs for Zoolander No. 2 in Berlin by FameFlynet