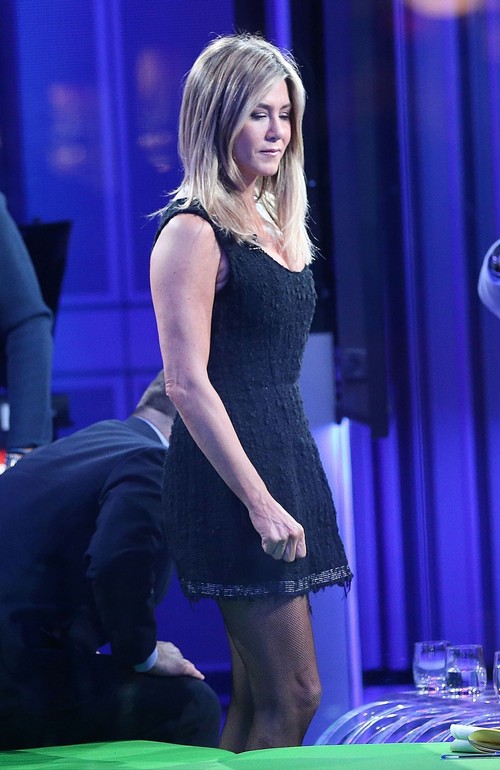 Jennifer Aniston left viewers stunned with a major on-air gaffe she during an interview on British television. The Hollywood actress said ‘sex toys’ in front of a group of disabled children while promoting a new movie. The 47-year-old Hollywood actress was promoting her latest movie, ‘Office Christmas Party’ with directors Will Speck and Josh Gordon when she made the awkward blunder.

During the interview, one BBC presenter asked the directors, “What’s Jennifer like to work with? Is she Rachel from ‘Friends’ or Julia Harris from ‘Horrible Bosses?’” When both men answered that she’s a bit of both, Jennifer added, “Just without the sex toys!” Viewers were left stunned with Jennifer’s answer, with many taking to their social media accounts to slam the actress for her comment.

The interview aired at 7pm local time, which means many families with small children were watching the BBC program together. If that weren’t enough, a lot of viewers were outraged that Jennifer said ‘sex toys’ in front a group of disabled children that were in the audience. They were part of the Rickshaw Challenge, which is a charity that raises awareness for disabled and disadvantaged children. The group celebrated their recent success with an appearance on the show.

Yet, critics aren’t surprised that Jennifer Aniston made the gaffe in front of a group of children. Simply put, Jennifer is a 47-year-old woman who doesn’t seem to pay attention to any children that might be around her. She’s so used to living her child-free life that she’s appears unaware of possibly offending families with the unfiltered things she says.

Perhaps Jennifer doesn’t think about children because she doesn’t want them. Even though many reports indicate that Jennifer Aniston has desperately been trying to get pregnant for years, it’s safe to say that the actress won’t be having children any time soon. Check back with CDL for all the latest news on Jennifer Aniston right here!

Actress Jennifer Aniston is seen on set of ‘The One Show’ in London, UK on November 21, 2016. FameFlynet