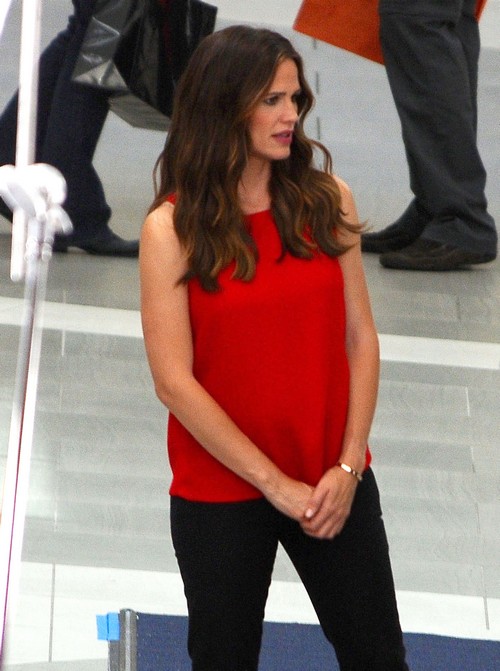 Jennifer Garner pregnancy rumors are beginning to circulate again as the celebrity mom was spotted hiding what looks like a baby bump under her shirt. The speculation of course further adds that Ben Affleck and Jennifer Garner’s separation has only brought the married couple closer together again.

Jennifer Garner was spotted filming a commercial for Capital One Credit Cards in Los Angeles this week. The Hollywood actress has been in a couple of Capital One commercials before and is filming a new one while desperately trying to hide her baby bump, as she’s clearly not ready to tell the world that she’s expecting again.

A Ben Affleck and Jennifer Garner divorce almost happened back in 2011, but because the ‘Miracles From Heaven’ actress fell pregnant with their third child, Ben Affleck was forced to stay put. After all, dumping his pregnant wife would absolutely kill his career as fans would turn their back on him for destroying his family.

After all, Jennifer Garner has worked so hard to create a wholesome, laid back image of her as a hands-on mom to the couple’s three children while Ben Affleck has reluctantly played along to all of her carefully curated photo-ops of their family.

Even though Ben Affleck and Jennifer Garner’s separation has lasted well over a year now, they’ve mostly lived “together, but apart” as the actor is yet to move out from their Brentwood, California mansion. In fact, if Jennifer Garner is indeed pregnant with the couple’s fourth child, it’s just a further indication that the couple will never file their divorce papers.

Either Jennifer Garner’s plan to keep Ben Affleck has definitely worked or the actor just doesn’t have it in him to permanently destroy both his family and his career.

While there’s no doubt that Ben Affleck has definitely made some questionable decisions in the past, could he really be that naïve to get Jennifer Garner pregnant again, despite all of their marital problems? Or is Jennifer Garner this desperate to show the world that she’s in control of her family?

Is this baby the Band-Aid that is supposedly going to fix Ben Affleck and Jennifer Garner’s marriage? Let us know what you think in our comments section below!

Jennifer Garner is seen filming a commercial for Capital One Credit Cards in Los Angeles, California on July 26, 2016. FameFlynet