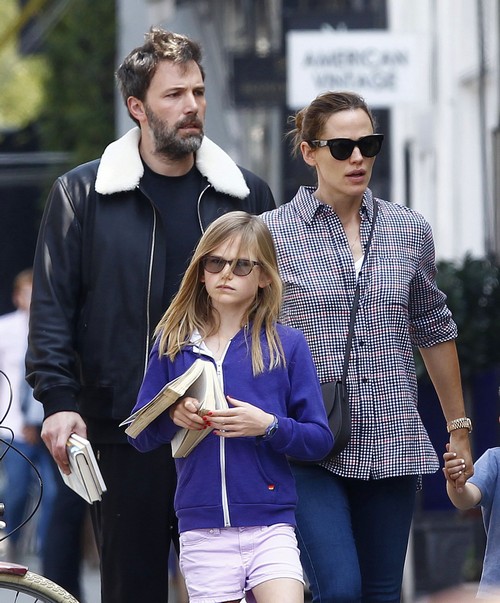 Is Jennifer Garner pregnant with Ben Affleck’s baby? The couple has been vacationing in France and England for quite some time with their three children. Would it surprise anyone if Jennifer and Ben conceived are expecting again? Are Ben and Jennifer ready to call off the divorce?

After spending some time in Paris with Violet, Seraphina and Samuel the family of five was spotted taking the Eurostar train to London from Paris recently. In several photos that popped up on social media Jennifer appears to be trying to hide a baby bump, according to Radar, with a large white T-shirt a long purple scarf draped around her neck and failing to her waist.

Jennifer Garner has made no secret of the fact that Ben Affleck is the love of her life. The actress made that very clear in a Vogue interview. Jennifer also said that the couple had separated before accusations that Ben had cheated with the kids’ nanny Christine Ouzounian surfaced.

There have been suggestions that Jennifer separated from Ben in an effort to shake up the Academy award winner and make Ben realize he was going to lose the best thing that’s ever happened to him. There have been rumblings for years that Ben is a workaholic who puts gambling and drinking ahead of family life.

Ben and Jennifer reportedly still share their Los Angeles home, have spent holidays together and took a Valentine’s Day vacation with the kids. Neither has filed for divorce yet even though the separation was announced their separation nearly a year ago. This doesn’t sound like a couple in a hurry to get a divorce. It sounds like a husband and wife trying to put their marriage back together.

Ben and Jennifer may try to fool everyone else, but the couple can’t fool their children. Kids know when there’s tension between their parents. Violet, 10, and Seraphina, 7, are old enough to notice if mommy and daddy aren’t sharing a bedroom or a bed and ask a lot of questions.

Before Ben Affleck and Jennifer Garner left for London and Paris they reportedly had been spotted on a few romantic candlelit dinners around town. Has this time overseas helped the couple to repair whatever cracks were in the marriage? And is baby number 4 on the way for Ben and Jennifer?