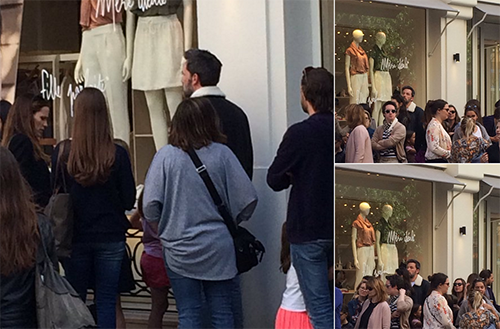 Have Jennifer Garner and Ben Affleck reunited and called off their divorce? Has a Paris vacation rekindled the couple’s romance? Twitter lit up when a Frenchman posted a photo of Ben and Jennifer standing in line with their children to get some ice cream in Paris. This, of course, sparked speculation that Jennifer has forgiven Ben for having an affair with nanny Christine Ouzounian. Are they trying to put the marriage back together?

As previously reported, Ben, Jennifer, and their three children plan on spending most of the summer in London while Ben is filming ‘The Justice League.’ Sure, it’s kind of odd that Jennifer would drag Violet, Seraphina, and Samuel to London while Ben is working, but hey, at least the kids will get some time with dad, right?

While overseas, Jennifer and Ben took a little side trip to Paris with the children for a family vacation. Mind you, Ben Affleck and Jennifer Garner were not holding hands or giving each other doe-eyed looks of love. But they were in public and getting some ice cream with their children! PDA wouldn’t have been appropriate.

Everyone is watching for any sign that the divorce is off and Jennifer and Ben are back together. A trip to an ice cream shop in the most romantic city in the world is bound to spark speculation, right?

The family spent Thanksgiving and Christmas together, enjoyed a Valentine’s vacation with their three children, and reportedly has been out on a few romantic dates. All signs seem to point to a reunion.

Ben is the love of Jennifer’s life. She admitted it in a recent interview with Vanity Fair. Jennifer also said that Ben can be a cold and selfish husband, often preferring to spend time drinking and gambling to being with the family.

Jennifer and Ben announced their separation in June 2015 after a decade of marriage. Jennifer revealed the couple had been separated for months prior to the announcement. Reportedly, to date, no divorce documents have been filed in Los Angeles County.

Is it possible that Ben Affleck is putting forth a serious effort to change and become the husband Jennifer Garner wants and the father the couple’s three children deserve? Or is the time in London and Paris just Jennifer and Ben exhibiting excellent co-parenting skills?